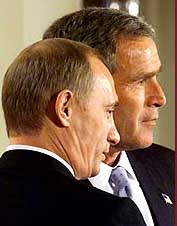 In view of the coming visit of the American president to Russia, U.S. Congress began discussing Russian issues once again

President George W. Bush is expected to attend a ceremony in commemoration of the 60th anniversary of WWII victory to be held in Moscow on May 9th, 2005. In view of the coming visit of the American president to Russia, U.S. Congress began discussing Russian issues once again. Some senators are talking about things that might create a better background for the Moscow meeting between Mr. Putin and Mr. Bush. Others are drawing attention to issues that might spoil the meeting.

Republican Trent Lott, chairman of the Senate Committee for Agenda and Administration, has called for revocation of the Jackson-Vanick Amendment with regard to Russia. The amendment passed Congress back in 1974. It was proposed by Charles Vanick and Henry Jackson after U.S. Jewish communities appealed to the government to put pressure on the USSR which imposed restrictions on free emigration. Even though the U.S. government has “temporarily” put the amendment on hold a while ago, its existence still hampers the development of economic relations between Russia and the United States. The revocation of the Jackson-Vanick Amendment has been an issue of political bargaining in USA ever since the Soviet Union broke up and the free emigration restrictions became history. The advocates of a limited trade policy toward Russia would either point to the lack of liberalization in Russian economy or abuse of human rights. U.S. Department of Commerce awarded a market economy status to Russia in the summer of 2002. Mikhail Kasyanov, then Russian Prime Minister, had no doubts at the time that the Jackson-Vanick Amendment would be canceled within four months at the longest. As for the American criticism of human rights violations in Russia, similar accusations were brought by the U.S against the Chinese authorities.  Despite the accusations, USA eventually revoked the amendment with respect to China. Given a possible cancellation of the amendment in respect of Ukraine, the latest proposal to cancel the amendment for Russia do not seem a good will gesture. It would be strange to watch the restrictions on trade with Ukraine being lifted while the same amendment still applies to Russia. During his trip to Washington earlier this month, Mikhail Margelov, chairman of the committee for international affairs of the Federation Council, spoke against the revocation of the amendment for Ukraine only.

The other group of American lawmakers are apparently trying to please some leaders of the Baltic states who keep talking that the Soviet Union occupied their countries after WWII. Nine members of the House of Representatives of U.S. Congress came up with a draft resolution which demands that Russia officially acknowledge the “illegal occupation” of Lithuania, Latvia, and Estonia from 1940 to 1991. The resolution is, no doubt,  directly related of the visit of President Bush to Russia and the Baltic States in May this year. Incidentally, the term “illegal occupation” is purely an American invention. Politicians in the Baltic states are normally referring to “occupation” per se. The congressmen seem to have coined the new term on purpose. Since the U.S. is an occupying power at the moment, it would be rather inconvenient for the Americans to hand down a moral judgement on similar actions.