Did the U.S. government cover up the details pertaining to the assassination of John Fitzgerald Kennedy? An answer to this question will be much sought after by participants of a conference that kicked off on Monday, May 15th, in Washington, D.C. According to the report of the Warren Commission, President Kennedy fell victim to “Lee Harvey Oswald, acting alone.” However, the “alternative” versions of the tragedy argue that two or more people shot at JFK in Dealey Plaza in Dallas, Texas, on November 22nd, 1963. The above versions allege that U.S. government covered up the truth behind Kennedy’s death. 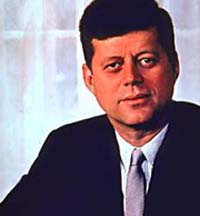 Douglas Horn, the former chief analyst of U.S. Congress on the Kennedy case, took part in the conference. He was among other experts calling the official version of the tragedy into question. The participants will include the historian from Minnesota James Fetzer, and the specialist in radioactive oncology David Mantic. Thomas Lipscomb, a well-known U.S. author, is expected to unveil more data indicating discrepancies in evidence used by the Warren Commission, which was set up by President Johnson to investigate Kennedy’s murder. In particular, Lipscomb is reported to have found evidence showing that the famous amateur footage (by Abraham Zapruder who happened to witness the assassination) was obviously cropped away by some unknown party.

Some of the participants of the conference have information showing that the 26-second footage filmed by Zapruder on 8 mm camera is just one of eight existing amateur documentaries on the assassination of President John F. Kennedy. However, with the help of some interested party, Zapruder’s short film became the main piece of material evidence for the Warren Commission.

Experts are trying to locate other documentaries.

The participants will reportedly present new data to support the version about the “CIA conspiracy.” According to the theory, CIA agents might have replaced Kennedy’s brain with that of another person during the president’s autopsy.

By a strange twist of fate, the plane carrying Senator Ted Kennady, the brother of the late President John F. Kennedy, was struck by lightning right on the day when the conference kicked off in the U.S. capital. No one was harmed during the incident yet the news seemed to serve as yet another reminder of grim fate controlling the Kennedys.