The new Ukrainian authority is forcing the influential groups, upon which ex-president of Ukraine Leonid Kuchma relied before he left the presidential post, out of the authority and paying economic sectors. It is declared that some of Ukrainian oligarchs may be even jailed. The recent scandalous arrest of ex-governor of the Ukrainian city of Donetsk and a henchman of ex-prime minister Viktor Yanukovich, Boris Kolesnikov has probably been just a touchstone. Boris Kolesnikov was charged with blackmail. 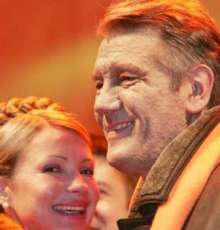 Boris Kolesnikov, a henchman of ex-prime minister Viktor Yanukovich during the presidential campaign, and a fellow of “the steel king” and influential oligarch of Donetsk Rinat Akhmetov, is now blamed of a criminal offense meant to redistribute property. The Bely Lebed (White Swan) shopping center is in the focus of the scandal. Boris Kolesnikov in his turn believes he is persecuted for political reasons. The Ukrainian Interior Ministry states that three armed attempts at former owners of the shopping center were organized in the framework of the property redistribution.

Ukrainian Prime Minister Julia Timoshenko (she is coming to Moscow at the end of the week) has confirmed the other day the same may concern other oligarchs. The new authority is going to establish tough control over Ukraine's export, in other words over the chemical industry, petroleum refining and metallurgy. Special agents of the government will inspect these economic sectors. The Ukrainian government promises a daily monitoring of the chemical industry and petroleum refining. The export of diesel oil and some fertilizers is prohibited till end of the sowing campaign.

The relations between the metallurgical industry (Leonid Kuchma's son-in-law Viktor Pinchuk is the most influential magnate in the sector) and the new authority are going to be even more problematic. Julia Timoshenko says that “five Ukrainian families” have been gaining billions of super-profits by understating the cost of iron-ore stuff, railway tariffs and no-tax resale of metal through offshore zones. To put an end to the illegal transactions, Julia Timoshenko promises to involve the police in investigation of foreign contracts concluded by metallurgical enterprises and iron-ore producers. The prime minister wants to make oligarchs pay taxes.

Oligarchs of Ukraine want to gather for a meeting code-named “Congress of Ukrainian metallurgists” April 13. The prime minister in her turn promises to punish saboteurs.

Twelve former influential high-ranking officials of the Kuchma epoch are summoned to the police April 11-15 on suspicion of large-scale corruption. These officials were holding high positions in the Ukrainian regions under Kuchma; they realized perfectly well they would lose their positions as soon as Yushchenko comes to power and managed to get positions in local authorities. In the future, these officials might have become the support to the opposition.

The activity of charitable foundations headed by Rada deputies is also shady enough.

Ex-prime minister Viktor Yanukovich is making attempts to form the resistance movement. He compares the events in Ukraine with the French revolution “that started with the declaration of human rights and ended with terror.” “It made no sense overthrowing Kuchma to give way to another even more cynical one,” ex-chairman of Yanukovich' election headquarters Taras Chornovil says.

Ukraine is experiencing sweeping redistribution of influence and property. Prime Minister Timoshenko believes “people who have been plundering the country within the past years must account for their doings.”

On the photo: Julia Timoshenko and Viktor Yushchenko