Now after all the European club competitions have come to a conclusion, the attention of all football lovers has switched to the upcoming World Cup which starts in Germany on 9th June. Whilst the fans are looking forward to the start of the tournament, the respective services are actively preparing for the arrival of the players and the influx of fans from around the world. At the same time the question of security is being given additional attention. 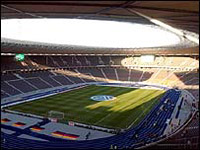 Obviously one of the main problems for the German police will be the fans themselves, especially those belonging to “hooligan elements” or neo-Nazis: a “warm” welcome lies in store for these aggressive fans in the shape of special robot-tanks. However it is no secret that an event of the magnitude of the World Cup is a lure for terrorists who may force themselves into the minds of the international public. This was again confirmed by a publication in the Western media of a secret German police report which says that there are 21 matches which could be a potential target for Islamic terrorist groups.

As is noted in the report, the threat mainly concerns those matches in which footballers from the countries leading the military action in Iraq and Afghanistan will be playing. Of course this means the national teams of the USA and England (both will be playing at least three matches each), and also Spain, Poland, Italy and Australia. According to information from the police, they are not ruling out terrorist acts carried out by suicide bombers, and using small aeroplanes or helicopters.

The report stresses above all that to a large degree terrorist acts are not a threat to those fans who will be coming to the stadiums to cheer on the numerous teams, but to the people who do not manage to get hold of a precious ticket and who will be forced to watch the matches on giant TV screens in specially designated areas. No metal detectors have been set up there, and therefore it will be practically impossible to detect potential terrorists in a crowd of fans with rucksacks. Furthermore, any mass gatherings of people could end up being a target for terrorists (railway stations, for example), as well as the places where the numerous national teams will be staying. With this in mind, a careful background check of 250 thousand people who will be involved in the World Cup is currently being carried out, from sausage vendors to firemen, and various measures are being taken to strengthen security in hotels and at the bases which are awaiting the arrival of the national team delegations.

This enormous level of attention which the local police are paying to questions of security can be further explained by the fact that the tragedy of 1972 is still fresh in the minds of people in Germany, when at the Summer Olympics in Munich Palestinian terrorists attacked the Israeli team, took it hostage and shot 11 athletes. God willing, nothing like that will happen at the World Cup.