Mikhail Saakashvili cannot boast of having any political or economic accomplishments

The Georgian public opinion research association, Gorbi, has recently published results of the research, which was devoted to the activity of the Georgian President Mikhail Saakashvili and the ruling party of Georgia, the Joint National Movement, over the recent year. The results have brought quite an unpleasant surprise to the Georgian government: the popularity of the Georgian president and his supporting party has been declining very fast. 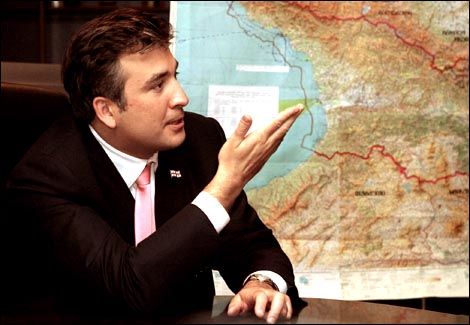 The president's rating dropped by almost 25 percent within a year: from 63 to 38.2 percent. About 37 percent of respondents said that the living standard in Georgia improved after the revolution, whereas 34 percent believe that life was a lot better, when the Georgian ex-president Eduard Shevardnadze was at power. It is already possible to presume that Georgian citizens' opinion differs equally. It is noteworthy that 31 percent of respondents gave a positive answer to the question of whether events in Georgia were developing correctly or not. Sixty-eight percent gave the same answer to a similar question a year ago.

The majority of respondents – 38.2 percent said that they would vote for Mikhail Saakashvili, if the presidential election took place in Georgia today. The speaker of the Georgian parliament, Nino Burjanadze, comes second, albeit with a very big difference – only 7.1 percent of respondents said they would support the speaker's candidacy. Forty percent said they did not know the answer to the question.

It goes without saying that it is too early to come to any conclusions on the base of only one opinion poll. However, the current trend is clear. Mikhail Saakashvili came to power in the former Soviet republic of Georgia as a result of the revolution, which was caused with the national discontent with then President Eduard Shevardnadze. On the other hand, Shevardnadze used to enjoy the support of almost the entire Georgian population in the start of his career as the president. However, such popularity usually does a very bad favor to politicians, who give too many promises. This rules works not only for Georgia, but for any country of the globe.

Georgian President Mikhail Saakashvili cannot boast of having any political accomplishments. Georgia has not achieved any progress in the field of economy either. One can continuingly dwell upon the economic growth, but if people see and feel absolutely no changes for the better, such argumentation becomes absolutely pointless.

Mikhail Saakashvili has become renowned for his notorious political statements. The Georgian president has recently stated, for example, that Georgia is doing its best to destroy the “empire” of the post-Soviet states. Georgian citizens, however, are still short of electric and heating power in their homes.