Russia needs to accept that the USA has legitimate interests in the post-Soviet sphere, said US Secretary of State Condoleezza Rice, speaking in Washington before newspaper editors. 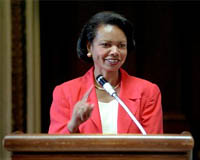 “Russians must accept that we have our own relations with their neighbours, even if these countries were once part of the Soviet Union,” she stressed. “I know this is sometimes difficult to do. Sometimes suspicions arise over our relations, for example with Ukraine.”

Rice admitted that events happening inside Russia today give rise to somewhat greater concern for the USA than its foreign policy, ITAR-TASS reports. “The press in Russia is not very free, especially the electronic media,” she continued. “The judicial system does not give the impression of being very independent, at least judging by the most high profile cases.” However, in her opinion, “the biggest problem is probably the concentration of power in the Kremlin”.

Rice is optimistic because the American side is able to “quite openly” discuss all these questions with Russian officials. The Secretary of State admits that to a large extent this is helped by good personal relations which she has established with the Russian Ministers of Foreign Affairs and Defense Sergey Lavrov and Sergey Ivanov. She also mentioned the good relations between the presidents.

Commenting on the widespread opinion in the West that democracy in Russia is “recoiling”, Rice repeated her well-known theory that today’s Russia is far from being the Soviet Union which she once studied. Rice also spoke out against refusing to interact with Russia in the “Big Eight” or the Russia-NATO Council. In her opinion, this will bring no positive results for democratization in Russia.