Chernobyl still poses a lethal danger to the environment

Chernobyl still remains a big problem for the environment of Ukraine and its neighbouring countries nowadays, 20 years after the explosion of the nuclear reactor of the power plant. Radionuclids that were blocked at special underground facilities soon after the breakdown accumulated in the ground or penetrated into closed water reservoirs. Underground waters and the waters of the Plripyat River distribute about 90 percent of radionuclids beyond the zone of alienation. 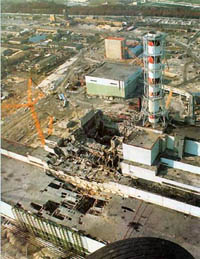 Chernobyl still poses a lethal danger to the environment

Specialists conducted a research in 2005 to study the radioactive pollution on the territory of 30 kilometers around the Chernobyl nuclear power plant. The research showed that up to 90 percent of caesium-137 lies at the depth of only 10 or 15 centimeters. Strontium-90 is embedded only 20 or 30 centimeters under the ground. It is worthy of note that the rootage of many plants which animals and birds use as food has a similar length of 20-30 cm.

The locations of radioactive wastes in the alienation territory still pose a serious threat to underground waters. The Pripyat River affects the balance of subsoil waters on 700-800 meters of flood lands, which means that radionuclids are found in melt waters in spring.

It goes without saying that the liquidation of such a huge catastrophe would empty the budgets of highly developed and wealthy countries. Ukraine is still incapable of covering the necessary costs, including social allowances to those who suffered from the disaster.

Five years ago Ukraine shut down the last of the active units of the Chernobyl power plant according to the memorandum signed with the G8 countries. According to the memorandum, the foreign countries promised to fund the construction of a new facility for burying radioactive wastes. The West has already provided about $1.5 billion for the solution of Chernobyl problems. Unfortunately, none of the international projects has been finished on time.

The Ukrainian government approved the project of a new sarcophagus to cover the exploded reactor of the Chernobyl power plant in March of 2004. This facility will guarantee protection against a possible discharge of radioactive materials from the ruined reactor. The European company Novarka and US consortium of CH2M Hill are currently competing for the project, promising to finish the construction in 2010.

The explosion of the Chernobyl nuclear reactor released 400 times more radioactive material into the atmosphere than the US nuclear bomb on Hiroshima in 1945. Chernobyl poisoned 142,000 square meters in the north of Ukraine and in Belarus. The nuclear reactor was burning for ten days. The people who were trying to extinguish the fire were referred to as biorobots because they were working in the places where machines turned out to be useless. Thirty of Chernobyl liquidators died on the spot, hundreds of others suffered from cancer afterwards. Almost 18,000 people, including children, died within the 20 years after the tragedy.