Little was known about leaders of the Kyrgyz opposition until massive actions of protest swept across the country. One has to acknowledge that the world was not interested in parliamentary elections in the small Asian country, even if they could provoke a political crisis there. Kyrgyz oppositionists had very few hopes to win the elections: they said that 30 percent of seats in the parliament would be a great accomplishment for them. However, the regime of the Kyrgyz President Askar Akayev proved to be a lot weaker than his rivals could thinks. 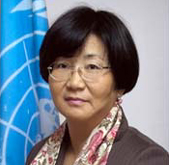 Rosa Otunbayeva, the leader of the Ata-Zhurt bloc, is known in Kyrgyzstan as the locomotive of the opposition. Otunbayeva said that it was President Akayev, who gave such a description to her. Rosa Otunbayeva is a professional diplomat. She graduated from the Department of Philosophy of the Moscow State University in 1972 and finished post-graduate course there as well. After that she spent about 15 years taking various party positions. She worked in the executive authorities system in Kyrgyzstan and eventually became deputy chairwoman of the republic's Council of Ministers. Otunbayeva chaired the Kyrgyz Foreign Affairs Ministry; she was the ambassador of Kyrgyzstan to the USA, Canada and Great Britain. She worked in the UN system and took the position of the deputy special envoy of the UN Secretary General to regulate the conflict between Georgia and Abkhazia.

Rosa Otunbayeva returned to Kyrgyzstan in September of 2004 and chaired the Ata-Zhurt bloc. She could not participate in parliamentary elections, though, for the national law required permanent residence in the republic: a candidate is supposed to live in Kyrgyzstan for not less than five years. Otunbayeva's followers organized several actions of protest to back their candidate's right to take part in the elections. Their activity only resulted in the fine of 1,000 soms ($25) for organizing unauthorized meetings.

Rosa Otunbayeva will most likely find her place in the new post-revolutionary government of Kyrgyzstan. She has already taken the position of the republic's foreign affairs minister in the interim government of Kurmanbek Bakiyev, who has been appointed both the acting prime minister and the president of the new Kyrgyzstan.

Rosa Otunbayeva and other leaders of the Kyrgyz opposition said that they did not expect Askar Akayev's regime to collapse so soon. Otunbayeva was certain that the situation in the country was very close to a critical level, although the former president's proponents were playing their sly game based on the nation's fear of the revolutionary chaos. The chaos occurred, “revolutionaries” looted and demolished the republic's capital, Bishkek. The new Kyrgyz government will have to do its best not to let the new era of Kyrgyzstan's history become associated with looting and robbery not only inside, but also outside the country. Rosa Otunbayeva's diplomatic experience will come in handy for the government.

On the photo: Rosa Otunbayeva