The Kazakh President Nursultan Nazarbaev’s limousine was almost run into by a jeep driven by an employee of the US Embassy in Kazakhstan, who then tried to flee the scene of the incident. This took place in Alma-Ata, the head of the traffic police department Omurzak Tusumov reported on Tuesday. 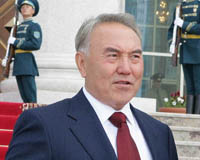 On Sunday at 15.30 local time, when the President’s cortege was leaving his Alma-Ata residence, a jeep was following along Furmanov street, ignoring demands from officers of the special branch of the traffic police to pull over to the side of the road. Furthermore, the jeep caught up with the presidential cortege, and having pulled up alongside the president’s limousine, turned sharply in towards it. However, the driver of the president’s car managed to avoid a collision, reports ITAR-TASS.

The president’s bodyguards only decided not to open fire because the jeep had embassy license plates. After the incident the driver of the jeep tried to flee. In trying to escape his pursuers, the offender knocked down an officer of the National Security Committee. But within just two blocks officers managed to stop the offender after traffic police inspector jumped onto the step of the jeep.

The driver of the jeep turned out to be an advisor to the military attaché of the US Embassy in Kazakhstan, Lee Henry Richard, who to begin with did not want to get out of the car. According to the US Embassy’s version of events, reported by the newspaper Liter, the diplomat apparently unintentionally got caught up in the president’s cortege.

Representatives of the traffic police have handed the offender over to the Foreign Ministry and the President’s bodyguard service, which are now seeing to this case.