Pravda.Ru has already written that on Easter Monday British tabloid The Sun published a small black and white photograph in which we can see a woman standing with her back to any onlookers. The top of the women’s figure is tightly wrapped in a white bathrobe, and she has a cap on her head. The woman is hitching up her bikini to change some wet clothes. In spite of the bathrobe which she has thrown on, you can see her legs and backside. 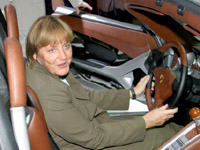 This seemingly innocuous photo has given rise to a serious conflict between two European states, members of the “Big Eight” and NATO. This is because the photo that the English tabloid newspaper printed was of Germany’s Federal Chancellor Angela Merkel on holiday in Italy. Under the photograph is the ambiguous headline: “I’m Big In The Bumdestag”, deliberately making a mistake in the name of the German Parliament in order to use the word “bum”.

Whilst the scandal-mongering British tabloid press is printing provocative and clearly mocking photographs, the dependable Times has made a U-turn, publicly praising Germany. The article with the headline “Merkel’s Miracle” is hinting at an old phrase referring to the post-war “German economic miracle”. The main message of the report is that Germany has long since stopped being “the sick man” of Europe and that there is no point in the English writing off the Germans.

Some people in England still have issues against Germany, such as over the Second World War which they almost lost and the rapid post-war economic development of their rival who had seemingly been destroyed once and for all. The extent of the islanders’ jealousy manifests itself in petty issues: when they have no trump card, they start bluffing or getting personal. And they also impose the image of Hitler on every single German.

They probably could have kept quiet, but the German tabloids like Bild intervened to defend the honour of their head of state. After all yet another shameless English newspaper Daily Sports published a photo of the half-naked couple of Frau Merkel and her husband Joachim Sauer.

The ungentlemanly act of the British in encroaching on the dignity of not just “the first lady” but any lady cannot really be explained by them earlier printing photos of their own Prime Minister Tony Blair in swimming trunks. Three years ago the paparazzi took snaps of him on holiday on the Caribbean island of Barbados .

The islanders took part in a lively discussion of the colour of their prime minister’s swimming trunks and found that they had a “greenish” tinge, and furthermore were “too small” for him.

In all truth, it was the vice-speaker of the Bundestag Thomas Steg who displayed “British restraint”: “This is really not in the British style. Of course the federal chancellor and her husband also have the right to a private life”.