Another revolution has rocked another post-Soviet state, following Ukraine and Georgia 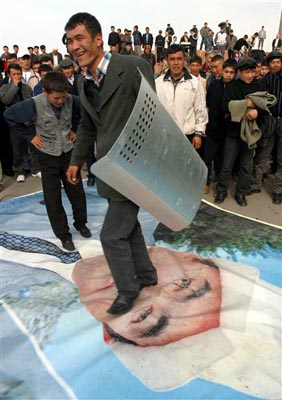 The government of Kyrgyzstan has been practically deprived of the opportunity to  control the situation in the republic. Protesters demand the results of the recent parliamentary election should be canceled (the second stage of the vote took place on March 13th). The adversaries of the incumbent President Askar Akayev have already seized power in two southern regions of Kyrgyzstan – in Osh and Jalal Abad regions. Such a turn of events could be predicted: the south of Kyrgyzstan has turned into the opposition-supporting region during several recent years. It was not really hard to make thousands of people leave their homes and come out in the streets to protest against President Akayev: the number of his adversaries is more than enough in the above-mentioned territories. One may say that another revolution has rocked another post-Soviet state.

The events, which are currently happening in Kyrgyzstan could be compared to the events in Georgia and Ukraine. Massive protests in the three republics have one thing in common: Kyrgyz, Ukrainian, and Georgian people were deeply disappointed in their governments.

The events in Kyrgyzstan are demonstrating the geographic split in the country. Massive opposition rallies started in the economically retarded southern region of the republic; they were not initiated either in the country's capital, Bishkek, or in northern regions, where a large number of industrial enterprises is concentrated. 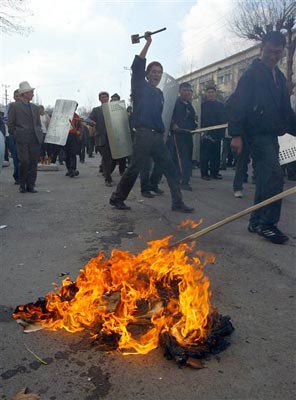 The low living standard and the high unemployment level (especially among the youth) has become a perfect environment for inciting massive resentment in the society of the republic. It is worth mentioning that clan traditions are rather strong in Kyrgyzstan: they play a very big role in the political and social life of the republic. Kyrgyz people support others of their own clans, whether they are right or not.

The followers of the Kyrgyz opposition are acting rather aggressively. They storm buildings of municipal administrations, police stations and airports, smash and burn everything that stands in their way (especially in Jelal Abad). Georgian and Ukrainian oppositionists were not using bottles of flammable liquid during their protests, at least.

The reaction of the international community to the events in Kyrgyzstan is rather constraining.  Russia, the USA, the EU and the UN have called upon the Kyrgyz government and the opposition to sit down at negotiation table and try to solve the problem. Kyrgyz President Askar Akayev has already urged his opponents to end the rallies and start the dialogue. Will the opposition listen to the president? It is up for them to decide. If Kyrgyz oppositionists think that it is better to continue exacerbating the situation in the country, they will not change their priorities.