The Pentagon and the US president have finally responded to requirements from senior defense officials of the USA to dismiss Defense Secretary Donald Rumsfeld from his position. 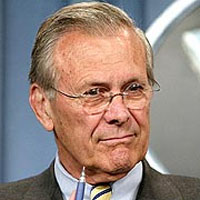 The claims appeared in mass media of the USA in March of the current year. Major-General Paul Eaton, who was in charge of training national security forces in Iraq, stated that Rumsfeld had lost any connection with the army, stopped following recommendations from the defense administration and became blatantly presumptuous.

The recent speech from another US general, Wesley Clark, who commanded the united armed forces of NATO in Europe from 1997 to 2000, has attracted a lot more attention of the general public. Answering a question from Fox TV correspondent regarding the right of retired officials to interfere in political processes, the retired general said that it was not only the right, but the duty of such officials. The ex-commander added that Donald Rumsfeld must step down.

On Friday the Pentagon issued a memorandum that said that the US defense command has been conducting a very close cooperation with the Defense Department on all issues regarding the making of strategic decisions. The memorandum said that Donald Rumsfeld had held 139 meetings with members of the Joint Chiefs of Staff and over 8,000 individual meetings with senior officers, both acting and retired ones. The document was emailed to almost all retired generals whose names had appeared in news reports. In addition to Eaton and Clark, Rumsfeld was criticized by Major General John Batiste, Lieutenant General Gregory Newbold, General Anthony Zinni, Major General John Riggs and Major General Charles Swannack.

Such criticism made US President Bush stand up and defend his companion. George W. Bush said in a special statement that Mr. Rumsfeld had the necessary strategic approach to the state of affairs and could handle the crucial moment which the nation was experiencing at the moment.

US politicians believe that the retired generals’ attacks against Donald Rumsfeld signal a conflict between the defense military command and the US administration. The former US Ambassador to the UN Richard Holbrooke said that the retired generals were speaking on behalf of their former subordinates and colleagues. The latter are still on active duty and thus have no right to meddle in politics. Halbrooke believes that Rumsfeld is not the target of the criticism. The head of the Pentagon follows the President and the Vice President in the state hierarchy. None of them can be dismissed from their posts. However, the politician believes, the officers blame the US administration for the ongoing failures in Iraq and Afghanistan. “If more angry generals emerge - and they will -- if some of them are on active duty, as seems probable; if the situation in Iraq and Afghanistan does not turn around (and there is little reason to think it will, alas), then this storm will continue until finally it consumes not only Donald Rumsfeld,” Richard Holbrooke wrote for Washington Post.