US and UK banks involved in Pinochet's dirty businesses

Apart from being a bloody dictator that killed no less than 5,000 opponents to his rule between 1973 and 1990, Chile's Augusto Pinochet is being exposed nowadays as a sophisticated money launderer, with bank accounts for as much as $15 million in almost ten countries around the globe. The US Senate investigation that probed Riggs Bank involvement in Pinochet's illegal operations has also unveiled a web of offshore accounts used by the dictator to hide money presumably stolen from state arks. 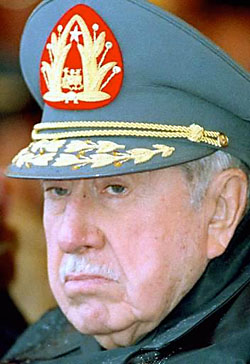 The British media reported that the Financial Services Authority is set to investigate a suspected web of City of London bank accounts allegedly used by Pinochet to launder money, following US Senate indications. According to Washington's report, similar inquiries are set to be conducted in Argentina, Switzerland, Bahamas, Spain and other countries.

Congressional investigators have identified at least $8m passing through the global web of offshore accounts over a 25-year period, and speculate that there may have been much more. Pinochet controlled some 125 bank and security accounts in reputed financial institutions as the Riggs Bank (in bankruptcy), the Citigroup and the Bank of America, among others.

By far, the US based Riggs Bank was Pinochet's first options to manage his funds. However, the Citigroup alone opened 63 accounts and certificates of deposit for Pinochet and another 19 for family members, and arranged international wire transfers, set up offshore companies and extended loans to the general or his relatives, according to the Senate report. Some of this business was conducted in the UK, as well as Switzerland and Latin America.

Citigroup said last week that Pinochet had opened his accounts 'with false documentation using pseudonyms', and emphasised that it shut them down once it realised they were his. However, prosecutors will go on with the inquiry.

Among the UK banks named in the document is the Coutts & Co private bank, which counts the Queen among its clients. Coutts sold its American operation to the Spanish Banco Santander in 2003.

In declarations to a Chilean daily, Pinochet's son Marco Antonio, admitted his father was millionaire, with savings between “$8,5 and $11 million”. However, he said, after being deprived from his savings by a judicial order, the dictator has to make do “with a pension”.

On the photo: Gen. Augusto Pinochet. The Chilean dictator (1973-1990) led a US plotted military coup against Socialist President Salvador Allende to rise to power