Condoleezza Rice calls for sanctions or even force against Iran

Iran’s continuing nuclear developments, in defiance of demands from the international community to shed light on their eventual aim, cannot fail to have consequences. This warning was issued on Thursday by US Secretary of State Condoleezza Rice and Canadian Foreign Minister Peter MacKay at a joint press conference to mark the conclusion of negotiations in Washington. The US Secretary of State declared that the UN must take decisive measures against Iran. She appealed for the Security Council to pass a resolution providing for the introduction of sanctions and the beginning of a military operation against Iran, reports Reuters. 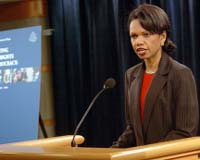 Condoleezza Rice calls for sanctions or even force against Iran

“There must be definite consequences in the light of their actions and provocation. We will study the whole range of possibilities which the UN Security Council has at its disposal,” announced Rice following the meeting with her Canadian colleague, as Itar-Tass reports.

This clause provides for the opportunity to impose sanctions and even use force if peace and security are under threat. A series of resolutions were passed against Iraq before the start of the military operation in 2003 on the grounds of Article 7 of the UN Charter. “We will look to take measures which will convince Iran that its only way out is to make concessions,” said Rice.

As Rice remarked, in the declaration taken at the end of March on behalf of the member countries “the UN Security Council gave Iran until the end of this month” to answer the IAEA’s questions concerning the nuclear programme of the Islamic Republic.

“At this stage the Security Council will have to examine this problem further. The Iranians have taken no steps to demonstrate their readiness to adhere to the international directives which were established for them,” declared the head of the US foreign policy agency. “Consequently we will have to react to this, and not in the form of yet another declaration by a Security Council representative”.

Let us remember that after three weeks of tough consultations and agreements the UN Security Council accepted the declaration made by a representative of the Security Council on 30th March on the Iranian nuclear problem. It reflects the opinion of all 15 Security Council members and was its reaction to the report presented by the IAEA Administrative Council.

In turn Canadian foreign minister Peter MacKay confirmed that Ottawa supports the idea of imposing sanctions on Iran if they continue to ignore the demands of the international community.

“We must clearly demonstrate to Iran that we expect it to comply with the Security Council’s demands under threat of the introduction of sanctions,” said MacKay. “We do not want to take any abrupt action which could destabilize what is already an extremely precarious situation in the region,” reassured the foreign minister. In his opinion, “we should start to examine all possible variants for taking action”.

The USA’s ambassador to the UN, John Bolton, emphasized that the head of the IAEA, Mohammad Al-Baradei, does not necessarily have to wait until 28th April, when he is supposed to present his report on the extent to which Iran is complying with the Agency’s demands. In Bolton ’s opinion, he could send this document to the Council as soon he returns from Teheran. On the other hand, Russia’s Ambassador to the UN Andrey Denisov announced that he sees no reason for this to happen.

The General Secretary of the UN Kofi Annan called for all participants in the discussion surrounding Iran’s nuclear programme to start looking for a diplomatic solution. He expressed his hope that Teheran will be able to return to the negotiating table and work alongside the international community in order to find a solution to the problem. Annan recalled that Iran has constantly declared its intention of using nuclear energy for peaceful aims. In connection with this Annan stressed that, if this is really the case, Iran must convinced the entire international community that its nuclear programme is in fact peaceful, reports the UN news service.

At the same time the US President George Bush is “skeptical” about the possibility of finding a peaceful solution to the conflict with Teheran over its atomic programme, announced the White House Press Secretary Scott McClellan.

In answering journalists’ questions about whether Bush is hopeful of finding a “peaceful solution to the problem”. McClellan said: “You can understand why we are skeptical if you take into account the record of the Iranian regime. This regime has a history of hiding its nuclear activity from the international community and not fulfilling its international obligations,” reports Interfax.

He added that, “President Bush personally is quite skeptical about the possibility of “cooperation and negotiations” with Iran.