One of the largest political figures of the Middle East, Ariel Sharon, left the world of politics yesterday. The Israeli Ministry of Justice made a decision to declare the former Israeli Prime Minister unable to execute his state duties for health reasons. The duties of the government chairman have been transferred to Ehud Olmert. 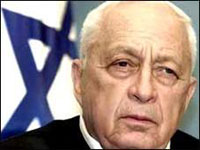 Ariel Sharon, now the former prime minister of Israel, has been staying in coma for three months already. Doctors believe that he will not be able to return to active life again. Sharon ended his own political biography when he lost his strongest and most serious opponent, Yasser Arafat, who died last year. When Arafat passed away, Sharon had no worthy rivals left.

Not many people know the real last name of the former 78-year-old Israeli Prime Minister – Sheinerman. Ariel Sheinerman comes from a family of Russian immigrants who left to live in Palestine. Sharon said in one of his interviews with the Trud newspaper last year that he would so much like to visit a small village near the town of Mogilev where his mother was born and four generations of his ancestors lived. Sharon’s grandfather served in the Russian army.

Ariel Sharon is one of the few politicians in the Middle East who managed to rise above party interests and leave delusions behind when the country was in need of changes. Sharon managed to change Israel, which is definitely something that not every politician can do.

The military and political careers of Ariel Sharon as a general and a politician were forming up under quite complicated circumstances. The rebellious territories around Israel and the irreconcilable opposition in the country could not make the work easy for Sharon. It is worthy of note that one of his predecessors, Yitzhak Rabin, was killed by a Jewish extremist but not a Palestinian terrorist.

The State of Israel virtually exists as a military camp for many years because of the conflict with Palestine. One may say that any decision of either the Palestinian or the Israeli government causes an outburst of violence in the two conflicting countries. Some may rejoice, whereas others grab their guns and take to the streets ready to fight for their own ideas.

When asked about a possibility of concessions or a mutual compromise with Palestine, Ariel Sharon gave an answer that could characterize him as a far-sighted politician. “People used to think of me as a general who liked to wage wars. When I was 20 I became the leader of a special unit of commandos. I then served inairborne and armoured troops. I had to go through the nightmare of war, I lost many of my friends, was seriously injured twice. On many occasions I had to make landmark decisions and risk the lives of my subordinates or my own life. That is why I understand the price and the significance of peace a lot better than other politicians do,” Ariel Sharon said.

Sharon was referred to as a ‘hawk’ for his tough decisions and resolute speeches. The elite unit of special forces, which he used to lead, arranged a massacre in an Arab village in October of 1953. That was a response to the murder of a Jewish woman, whose death eventually led to the slaughter of tens of Arab civilians. Another outrageous episode in Sharon’s career occurred in the beginning of the 1980s, when Defense Minister Sharon approved armed aggression against Lebanon. As a result, detachments of Falangists (radical Lebanese Christians) slaughtered hundreds of Palestine refugees. Sharon was discharged from the army and finished his military career, but soon returned as a politician.

Being a very popular man in Israel, Sharon was taking very tough and controversial decisions. He was spending the last years of his stay in big politics seeking peace or at least compromise for Palestine and Israel.

Ariel Sharon always highly estimated the role and possibilities of Russia in the regulation of the Mideastern conflict. The Israeli prime minister was on rather friendly terms with Vladimir Putin. “Many in the West cannot understand the Russian mindset. When in the USA, for example, I try to explain that Russia is trying to return to the group of the great powers, to preserve this status. This is a natural and normal wish for Russia to have. Russia had to face serious problems at a certain stage of its historical development, but this moment will not last forever,” Sharon said.

The President of the Russian Institute for the Middle East, Evgeny Satanovsky, believes that the relations between Israel and Palestine enter a different stage without Sharon. “Sharon was an outstanding figure indeed. They hated but feared him. They cursed but respected him. The new leader that will take his place in Israel will obviously lack Sharon’s qualities, ties and influence,” the scientist said.

The massive stroke that Ariel Sharon suffered ended a whole historical epoch. Now it is up to Sharon’s sons to decide whether they should disconnect their father from life-support systems.