Yesterday evening the Iranian president Mahmoud Ahmadinejad announced that his country has successfully begun enriching uranium, joining the “club of nuclear powers”. He stressed that Iran is not striving to possess nuclear weapons. 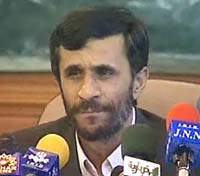 The former president of Iran Hashemi Rafsanjani reported that at the nuclear facility in Natanza a cascade of 164 centrifuges has been successfully launched, in which enriched uranium is being developed “by industrial methods”. By evening the head of the Iranian nuclear programme Golyamreza Agazade confirmed that low-enriched uranium intended for use as a peaceful energy source has been produced in Iran. He says that Iranian scientists have successfully enriched uranium which contains a 3.5% level of the isotope uranium-235. Golyamreza Agazade reported that by the end of this year Iran is planning to launch up to three thousand centrifuges as part of the development of the national nuclear programme.

For military atomic production Iran will need tens of thousands of centrifuges. Teheran does not yet have that number of installations, but the successful development of one cascade suggests that it has the technology for this production. It may therefore be gradually expanded until it reaches the required scale. And no one can guarantee that after this Iran will not start producing highly-enriched uranium for military purposes.

An Iranian diplomatic source emphasized in conversation with a Vremya Novostey correspondent that “in recent years Teheran has already given enough evidence of the peaceful nature of its nuclear programme”. Therefore, he says that Iran will definitely not return to the moratorium on research into uranium enrichment which it needs to carry out in order to possess peaceful atomic energy.

US President George Bush may now be regretting that he personally promised not to carry out an attack on Iran. This joyous news was heard yesterday at the John Hopkins University in Washington. President Bush confirmed his commitment to “looking for a diplomatic solution to the dead-locked situation concerning Iran” and stressed the importance of working alongside Europe and Russia to “prevent” the emergence of nuclear weapons in Iran.

“I know that here in Washington “prevention” means using force…But this is not necessarily true. In this case “prevention” means using diplomacy,” explained the president. It is a question of “multinational diplomacy”. According to the president, the essence of the diplomacy is in “sending messages to the Iranians, clear messages that if they want to be accepted in the international community, they must abandon their military nuclear ambitions”.

The White House chief reported that information about plans to launch a nuclear attack on Iran are “wild speculation”. This description is referring to scenarios published a few days ago in the magazine New Yorker and newspaper Washington Post for an anti-Iranian military operation, which had supposedly already been drawn up by American generals. According to versions published by the famous journalist Seymour Hersh, the Pentagon has decided to follow the principle that “like cures like” and make Iran abandon its nuclear programme with the help of a tactical nuclear weapon. This would be used by the USA to strike underground bunkers containing Iranian command points and, as the Americans suspect, secret laboratories and nuclear installations.

The task of impressing the ideals of “multinational diplomacy” on Iran has fallen to the General Secretary of the International Atomic Energy Association (IAEA) Mohammad Al-Baradei. Today he is beginning a two-day visit to Iran. Whatever was said in Washington, from international legal perspective Mr. Al-Baradei is the only international official with the power to severely punish or pardon Iran. He has a joint mandate from the IAEA and the Un Security Council. At the session of 29th March the Security Council instructed Al-Baradei to prepare a comprehensive report on the Iranian nuclear programme within the next month. His visit to Teheran has come at precisely the mid-point of this period. However, yesterday’s nuclear revelations from the Iranian leaders have greatly increased the probability that the Security Council will decide to introduce sanctions against Iran.

The Russian Foreign Ministry yesterday confirmed their support for Al-Baradei’s mission and called the IAEA “the only respected international body which has the necessary expertise and powers to check that states are observing their obligations in connection with the Treaty on the non-proliferation of nuclear weapons”. The Head of the Russian Foreign Ministry Sergei Lavrov yesterday appealed for Teheran to cooperate with the IAEA in every possible way.

However, it seems as if Teheran did not heed his call.