Alan Garcia is fighting a close battle with his conservative rival, Lourdes Flores, for the second place in the country’s presidential elections and challenge nationalistic candidate, Ollanta Humala, in the second round scheduled for June. 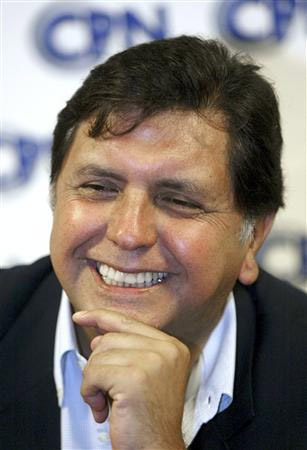 In what it has turned into an exciting finale, the center-left former president of Peru, Alan Garcia, Monday jumped to the second place of the country’s presidetial elections and is now the best positioned to face nationalistic leader Ollanta humala in the second round scheduled for June. With 77.75 percent of the votes tallied, official results gave Humala 29.94 percent, Garcia 25 percent and conservative candidate Lourdes Flores 24.37 percent.

The 43-year-old military man, Ollanta Humala, called on "all Peruvians" after Sunday's vote to "join up with this movement to transform Peru." But a close battle for second place left unanswered whom Humala would likely face in the second round — pro-business former congresswoman Lourdes Flores or Alan Garcia, a center-left ex-president. Since no single candidate won a majority, the top two vote-getters will meet in late May or early June in a runoff.

Observers do not agree on who is the best positioned to challenge outsider Humala in the runoff. While some believe that the pro-market conservative message of Lourdes Flores could be more efficient against Humala’s anti-democratic background, others believe that the well organized party led by Alan Garcia is a more serious challenge for the nationalistic leader.

The early vote tally tended toward urban areas where Flores' support is strongest. Humala's political base is the country's Indian and mestizo majority, especially Quechua-speaking highlanders who've been discriminated against for centuries by the country's European-descended political elite. Garcia's backing, by contrast, is equally divided among city and country. His Aprista party is the country's best organized.

Alan Garcia is the man of the moment now. As president of Peru between 1985 and 2000, he refused to pay a big portion of the country’s foreign debt and nationalized the financial system. He was just 36 when he sworn in to become the youngest president of Peru.

The Social democratic leader fuelled programs to fight poverty and modernize the country, but international isolation and the internal opposition of the local monopolies led to an economical collapse by the end of his term. He left the power and was persecuted by his neo-conservative successor, Alberto Fujimori, and his powerful spy master, Vladimiro Montesinos.

Years later, the then army officer Ollanta Humala aided Montesinos to flee from Peru, as local courts were seeking him on charges ranging from corruption to tortures and other crimes against humanity. At that time, Mr. Fujimori was planning his exile in Japan not to appear before local courts on similar charges. Fujimori has been recently arrested in Chile as he was trying to return to Peru to participate in Sunday elections.

During the campaign, Alan Garcia, now 56, has warned that electing Humala would be launching Peru "into a void”. Humala's image as a stern military man who will fight crime and punish the corrupt has been a powerful factor in his swift public rise. So have his promises to raise taxes on foreign companies, spend more on the poor and rewrite Peru's constitution to strip power from what he last week called "a fascist dictatorship of the economically powerful."

However, it looks like Alan Garcia represents a more serious threat to Peru’s elite, as the news of his jump to the second place made the local stock market to go down by three percent. Stockholders celebrated the Humala versus Flores scenario early on Monday with a five percent rise in the Lima’s stockexchange market.

The Peruvian Electoral Council said that definitive results will be ready in 20 days. The date of the runoff will be released that day.