The US currency has been balancing on the verge of disaster these days. Several countries have announced their intention to diversify their dollar reserves this week. Central banks have decided to add some euro cash to their financial sources. 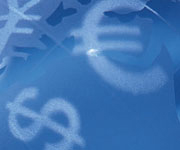 Another stage of the American currency decline touched upon Russia as well. The dollar value has been declining against the Russian ruble since February 9th, 2005. The US dollar costs 27.46 rubles at the moment in Russia in comparison with 28.18 rubles per dollar just a month ago.

This is the result of another wave of the anti-dollar hysteria. The story started with a message from the Basel-based Bank for International Settlements. It was said that central banks in several Asian states considerably reduced the dollar constituent of their reserves over the recent several years. Banks of China and India, for example, were rather emphatic about such a decision of theirs.  The dollar funds of those banks, BIS said, made up 81 percent of their total reserves in 2001. The dollar index dropped to 67 percent by September of 2004. The most considerable reduction of dollar reserves was registered in India: they dropped from 68 to 43 percent from 2001 to 2004.

Market specialists realized that the dollar dependence of the dynamic Asian region was exaggerated. The new concept later resulted in a very active promotion of the European currency. The European Central Bank said that it was going to raise its basic rate (2.25 percent currently) to create “the image of the euro” as a more attractive and reliable world currency. The statement from the bank gave an additional incentive to the growth of the euro.

The dollar started plummeting. The slide was intensified even further after the statement from the Japanese Prime Minister Koizumi. The minister told the national parliament that it was necessary to consider the issue regarding the diversification of Japanese currency reserves. Spokespeople for the Finance Ministry of Japan assured the troubled market a bit later that Japan would not be enlarging its euro-assets: the dollar demise was suspended. Nevertheless, the dollar rate has already stepped over the psychologically important level of 1.34 dollars per euro.

The future of the American currency can hardly be viewed as promising, though. The USA is to publish the balance of trade data in the near future. Specialists believe that they can hardly be better than the previous ones. “The liquidation of the dual American deficit – of the balance of trade and payment – is a matter of distant future. Oil prices are growing, and they have nothing to cut deficit on,” FIBO analyst, Rushan Zeinetdinov said.

Europe and Japan taught a good lesson to the States. The US Federal Reserve System is taking measures to stabilize the national currency. European and Asian specialists, however, believe that those measures are not sufficient. Raising the FRS rate by only 0.25 percent cannot stop the ongoing decline of the US dollar. Europe is apparently tired of the never-ending financial fight with the USA and decided to play the game of the strong euro, although it is definitely not good for European exporters. The strong euro might eventually undermine the global reputation of the dollar as the major world currency.

Specialists believe that the information of the Bank for International Settlements can be considered as another proof of the general trend to turn the dollar down as the key currency for saving deposits in.