Thousands of Chileans offered a moving farewell to Gladys Marin, the voice of the opposition to Pinochet's bloody dictatorship

Carrying red banners and waving hundreds of hammer-and-sickle flags, tens of thousands of Chileans marched in a moving funeral procession on Tuesday for Communist leader Gladys Marin, who was the voice of the opposition to bloody dictator Augusto Pinochet between 1973 and 1990. Marin's honesty and commitment to leftist principles made of Chile's Communist Party one of the most supported in Latin America since the fall of the Soviet Union, as probed the 10% of the votes it obtained in last municipal elections. 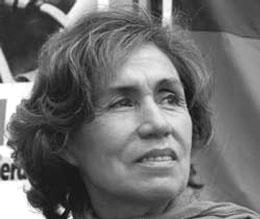 This charismatic woman, one of Cuban leader Fidel Castro's best friends, had to fight enormously for his life to defeat a brain tumour, which finally silent her clear voice at the age of 63. Marin was a prominent Communist leader at the time the US aided Gen. Pinochet toppled the democratic government of the Socialist leader Salvador Allende. She went into exile in 1974 after living eight months in the Dutch embassy seeking a safe-passage from the military. She returned to Chile secretly in 1978 and helped lead clandestine opposition to the infamous dictator.

Mourners wore pictures of a smiling Marin pinned to their shirts and chanted slogans such as "Justice, truth, no more impunity. Put Pinochet on trial." The crowd sang Chilean leftist anthem "Venceremos" and showered red carnations on Marin's hearse.

Chile's President, Ricardo Lagos, a pragmatic Socialist leader, declared a two-days mourning to honour Marin. Fidel Castro sent a farewell letter to Chile's Communist Party executive secretariat in which expresses condolences of Cubans. “She loved Cuba and our revolution, and thanks to her determination in keeping the fight, she gained the love of our people that now cries for her”, reads the letter.

Gladys Marin was sometimes known as Chile's “La Pasionaria”. Like the redoubtable Spanish communist leader Dolores Ibarruri, she was an impassioned and indefatigable campaigner for the causes she believed in.

A supporter of Salvador Allende's left-wing Government, she became a leader of the long resistance to the military dictatorship that followed his violent overthrow in September 1973, and felt the impact of General Augusto Pinochet's iron fist in her personal life: her husband, Jorge Munoz, another communist leader, “disappeared” in 1976 and has not been heard of since.

By the end of her life, even Marin's opponents conceded that she had long transcended party politics and become a national figure — a reality reflected in President Lagos's declaration of two days of national mourning for the woman who had stood against him in the 1999 presidential elections.

On the photo: Gladys Marin