U.S. Commander-in-Chief in Europe: Caucasus is vital for U.S. 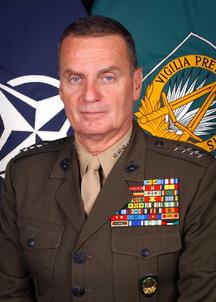 The Caucasus is among the most vital regions of the world for the United States, said Commander of the United States European Command James Jones. In the opinion of Konstantin Kosachev, chairman of Russia’s foreign affairs parliamentary committee, this statement betrays the true goals of the U.S. military presence in the Caucasus.

Mr. Kosachev noted that one of the U.S. goals in the Caucasus is to spread democracy and secure U.S. economic interests. So, Mr. Jones in fact “admits that the U.S. is spreading democracy by expanding its military presence in various parts of the world,” Mr. Kosachev said. The statement made by General Jones “could have been made by a politician or a diplomat, but not by a high ranking general,” he stressed.

But the general’s revelations contrast with statements made by U.S. politicians that the U.S. presence in the Caucasus is associated with countering an international terrorist threat,” he added. “The general blurted it out and thus confirmed the true intentions of the Americans in that region, which had been thoroughly concealed before.”

At the hearings in the U.S. Senate Committee on Armed Services on March 1 General Jones presented an analytical report on the current and future military strategic interests of the United States in the world. “Caucasus is increasingly important for our interests,” he said.

This region is a key one in the process of spreading democracy and market economy to the countries of Central and Southeast Asia, Mr. Johns said. In the coming five years Caspian oil running across the Caucasus may account for 25% of the world increase in oil production, he said. It has been estimated by the U.S. military that the Caucasian oil and gas will ensure a diversification of the energy sources for Europe, the general said, according to a RIA Novosti report.