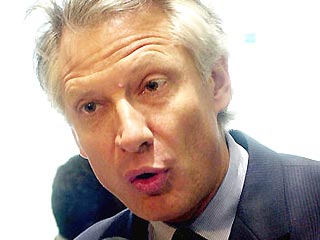 The French Interior Minister emphasizes that nowadays terrorists are highly likely to use weapons of mass destruction including germ weapons. He added that some documents recently became available and they prove al-Qaeda was seeking access to biological weapons and developed methods for use of these weapons. When the Talib regime was overturned in Afghanistan, some of the projects were proceeded with in Pankisi Gorge close to the Chechen border, the French Interior minister said.

The First World Conference on Bio-terrorism opened in Lyons Tuesday. Counteraction of the world community to the increasing menace of biological terrorism was on the agenda of the conference conducted under the Interpol aegis, ITAR-TASS reports.

The forum lasted for two days and gathered an unprecedented number of delegates from 150 countries of the world. Russia’s delegation is rather big; it consists of Interior Ministry officers and microbiology experts.

Interpol Secretary General Ronald Noble spoke at the beginning of the conference and said the terrorist threat today is as strong as it was on September 11, 2001. He added that intercepts of talks between large terrorist groups demonstrate that all countries of the world must seriously take the terrorist idea of deliberate contaminating hundreds or millions of people with viruses.

Ronald Noble reported that recently al-Qaeda stated it “had the right” to liquidate up to four million people, which is a serious reason for us to be concerned. The Interpol secretary general thinks that neither the US nor Europe and Asia will be absolutely able to resist a biological attack of international terrorists and subsequent epidemics of diseases.

A spokesperson for Interpol told ITAR-TASS that the conference focuses on making an international system for early detection of probable threat and for fighting bio-terrorism. A coordinating group has been recently formed in Interpol for this purpose. Every country that is a member of the global police is expected to form such subdivisions after the conference.

Tbilisi has no information proving that terrorists may be developing chemical weapons in Pankisi Gorge.

The Georgian authority has no information proving there may be some terrorists in Pankisi Gorge who develop chemical and biological weapons, Georgia Ministry for Internal Affairs Vano Merabishvili told Tuesday, Interfax reports.