There are many countries in the world which may illustrate modern political tendencies. Thailand can be probably described as one of the most expressive countries at this point, especially against the background of the snap elections which the country held last weekend. 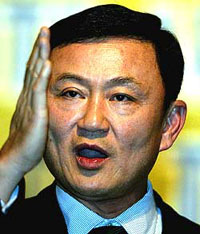 The incumbent Prime Minister of the kingdom, Thaksin Shinawatra, is a remarkable politician. He started as a policeman, but managed to become one of the richest men in the country. In addition, Shinawatra has become the first head of the Thai government who stayed on his position during the entire term.

His persona and the regime that the prime minister established in Thailand are very typical of modern politics. Shinawatra has become a master of populist decisions. Many specialists urge the government to take measures to raise the competitive ability of the economy of Thailand and prepare the country for the forthcoming economic growth. The chairman of the Thai government pays little attention to those warnings and tries to concentrate on his voters’ support. One has to give Mr. Shinawatra credit for it. The people living in rural areas of Thailand’s north and north-east are grateful to the minister for very cheap medical services and low interest rates for agricultural loans.

Shinawatra has also managed to prove that a politician can do very well without any ideology. More importantly, Washington previously supported Thailand promoting it as an example of democracy and multi-party system for other countries of the region. However, Thailand gradually gave up democracy without violence. The prime minister’s party gained 377 of 500 mandates in the parliament of Thailand as a result of last year’s election.

There is a different type of political activists in Thailand, of course. Like the opposition of Belarus, for example, they ask for economic welfare and democratic freedoms. They are especially indignant about Shinawatra’s wealth, which is also another peculiar feature of many world leaders of our times.

The Thai prime minister was receiving immense profits from a media enterprise several years ago. However, Shinawatra decided to sell his shares to one of Singaporean banks for $1.9 billion and concentrate on politics. The minister “forgot” to pay taxes for that deal, though.

The opposition of Thailand organized numerous rallies in the streets of Thai cities, Bangkok, first and foremost, to protest against Shinawatra’s regime. In return, the head of the Thai government decided to hold snap elections. The minister won the majority of votes and showed the opposition its place. It is worthy of note that the opposition parties refused to participate in the elections. Needless to say that they will continue to count the votes until they have the result which the incumbent prime minister approves.