Swearing has long been an everyday phenomenon in America, but with time it is becoming more and more common. This is the conclusion that specialists from the research service Ipsos have come to. Having interviewed 1001 North American inhabitants, they ascertained that three-quarters of those surveyed sometimes or often hear obscene expressions in public places. The “F-word” is used just as often in real life as in low-budget Hollywood movies. In the last 20 years moral barriers concerning bad language have become unstable, like a lop-sided fence on an abandoned ranch. 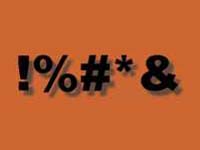 Joe Kormack, a barman from Iowa, recalls a customer who came to his establishment who only admitted to knowing obscene language, and perhaps really did not know any other language. As Joe says, “If he’d removed those words from his vocabulary, then there really wouldn’t have been anything left”. That is pretty much a typical regular at any drinking establishment. But in June 2004 the US Vice-President Dick Cheney allowed himself to curse at a colleague, an influential senator from the state of Vermont Patrick Leahy, using vile language. When the members of the Upper House in Congress had gathered for a group photograph, the deputy head of state suddenly turned to Democrat senator Leahy and broke out into what would previously have been considered vulgar abuse.

For Americans, who have been instilled with a spirit of political correctness and take their offenders to court on average once a year, the use of bad language has visibly become a way of psychologically releasing tension. Just one friend of a friend would genteelly beg: “Please don’t swear in front of me. I understand what it literally all means”. In America very few people think about the meaning of what they have said. An inhabitant of the state of Michigan explained it to a correspondent from the agency AP in the following way: “This four-letter word now doesn’t mean anything like what it originally meant. It has just become a part of our culture”.

Alas, not only in the USA but in other places around the world, vulgar language is starting not just to occupy “a part of culture”, but in fact the major part. And sometimes it replaces the entire culture.