Caspar Weinberger, the grave digger of the Soviet Union, dies at 88

Caspar Weinberger passed away on Tuesday, March 28. He was 88. As the Secretary of Defense under President Ronald Reagan, he made a substantial – if not a decisive – contribution into the destruction of the Soviet Union. Weinberger was the Reagan-era chief hawk, the man who designed the Strategic Defense Initiative, which still largely shapes the U.S. foreign policy. Indeed, Weinberger was the “godfather” of a galaxy of American politicians who embraced and developed his views on the global politics. 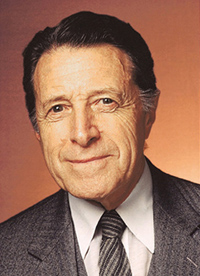 Caspar Weinberger, the grave digger of the Soviet Union, dies at 88

Weinberger became a legend during his lifetime, he was one of the few in Reagan’s team who managed to impose a “strategy of military-political parrying” on the Soviet Union in the early 1980s. For the most part the strategy was a sham yet it was a convincing sham. The USSR failed to discern the bluff of the notorious Strategic Defense Initiative in good time. Notwithstanding a number of the Cold War controversies or secrets that still remain to be uncovered, both U.S. and Russian experts saw Weinberger as one of the architects of a new “monopolar” world where the United States has no rivals. In such a world no nation can be good enough to take on the United States.

Weinberger, a respectable American, addressed his last words to the country he served and to his wife who stood by him till the end, reports the U.S. media. Weinberger was no stranger to the media. He was a certified newsmaker – the one who once admitted that the U.S. submarines had cruised in Sweden’s neutral waters, contrary to numerous reports about the Soviets lurking underwater off the Swedish coasts. He admitted that the subs were operating in that area in line with secret arrangements between the U.S. and Sweden. Weinberger was also a columnist and publisher of Forbes magazine since 1988. Aside from being credited with helping to drive the Soviet Union to history, his popularity primarily had to do with what is called the revival of the U.S. army. According to those who knew well the former defense secretary, Weinberger was a convinced Republican who had a rare gift of being a conservative and reformer at the same time. As a conservative, he was rather blunt in building a business relationship between the White House and the nation’s military-industrial complex. His successors had to make a considerable effort to ensure that the “link” between the politics and business was transparent and unambiguous. Weinberger became a central figure in the Iran-Contra scandal in 1986. Eventually, he was granted a full and complete pardon by President Bush in 1992. However, the scandal dealt a heavy blow to both the Pentagon and the U.S. foreign policy as a whole.

Prior to serving as America’s 15th defense secretary, Weinberger had held a number of administrative and financial posts. He earned the reputation of a penny-pinching economizer who was not afraid of reforms. In 1962 he demonstrated his budget-trimming talents while working as finance director for then Government of California Ronald Reagan. He quickly resolved California’s budget deficit problem.He was later recruited to head the Federal Trade Commission under President Richard Nixon. In 1970 he moved on to run the president’s Office of Management and Budget.

In fact, Weinberger brought to an end the military reforms started in the U.S. in the early 1980s. He was the first to avidly support a switch to a contract-based enrollment for the army. Weinberger strongly objected to sending the U.S. peacekeepers to Lebanon, which was being torn apart by a civil war. Reagan was finally forced to pull out the U.S. troops from that country following a terrorist attack that claimed the lives of 241 U.S. Marines in October 1983. As it turned out, Weinberger was right in his assessment. Despite being a staunch opponent of the Soviet Union, he called for rapprochement between the U.S. and China, a country that was difficult to suspect of hatching a reform plan for its communist system at the time.

Still, both his colleagues and the U.S. press would rather crown Weinberger with the laurels of a grave digger of the USSR. Former Defense Secretary Colin Powell said: “He restored dignity of the Army, found the resources to make our contract armed forces the best in the world, made the Soviet Union see reason and thus put an end to the Cold War.”

The issue of the Strategic Defense Initiative is an alienable part of Weinberger’s career. The Reagan Administration’s initiative got the Soviets spending huge funds on the arms race. Pumping billions of dollars into the military might yielded most dire consequences for the Soviet Union. Meanwhile, the role of the former defense secretary in the Star Wars program is not yet fully clear today. “Once our antimissile defense system is in place, we will render the Soviet Union’s nuclear arsenal useless. Then we will get back to the postwar situation when America was the only country with the nuclear arms,” said he at the time.

However, Reagan’s National Security Adviser Robert McFarlane, said later that Weinberger was especially doubtful about feasibility of Reagan’s plans on the Strategic Defense Initiative. “The myth of the Strategic Defense Initiative being a feasible program was America’s most outrageous bluff of the Cold War era,” Weinberger said, in an interview to a Russian newspaper several years ago.

Former U.S. Defense Secretary Colin Powell once was an intern with the Office of Management and Budget in 1971. The office was headed by Casper Weinberger at that time. Colin Powell worked under Weinberger’s deputy Frank Carlucci in the 1970s. The latter became secretary of defense in 1986. Both Weinberger and Carlucci trained the current Secretary of Defense Ronald Rumsfeld who was the White House Chief of Staff at that time. Besides, they also schooled the current Vice-President Dick Cheney. Staff means everything, as Stalin once put it. It is unlikely that you will doubt the statement as you look over the staff trained by the late politician.