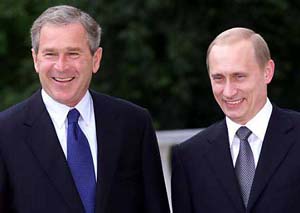 In the annual report on human rights observance in the world, issued four days after the Russia-U.S. summit in Bratislava, the U.S. State Department added Belarus,  Russia and Saudi Arabia on the list of countries in which human rights are trampled. Russia appeared to be in company with North Korea, China, Cuba and Iran. In this way the White House gave Russia a clear signal that it would not ignore the democracy issue.

The State Department examines in its report the human rights situation in 196 countries in 2004. While Belarus, mentioned in the report, which was put on the list of problem countries before, evokes no questions, the inclusion of U.S. strategic partners – Russia and Saudi Arabia – is almost sensational news.

Reviewing the situation in general, the authors of the report say that though Russia, on the whole, observed the rights of its citizens, the general human rights situation there is distressing and keeps worsening.

As regards Chechnya, the report says both sides in the confrontation – the Chechen militants and federal troops – care little abut human rights. The report levels strong criticism against the army and other power agencies in Russia and against the law-enforcement bodies. Among other problems of concern are abuses in the Russian army, the appalling conditions in which prisoners are kept, tortures and other ways of influencing people.

The authors of the report express concern over the growing concentration of power in the Kremlin and pressure on the media and legal institutions. While in other countries control over the actions of the authorities tends to grow, the report says, in Russia the changes in the election laws and going over from the election of governors to their appointment strengthen the power of bureaucracy still more.

In their annual democracy ratings the U.S. authorities want to show how the domestic political events in other countries influence the attitude of the U.S. leadership to them. At the same time, U.S. officials say that the chief goal of the annual State Department reports is not merely to state violations of democratic norms in some or other countries, but to try to influence the situation there.

A noteworthy fact is that Russia, like the other former Soviet republics, which have always been in the sphere of Russia’s vital interests, were criticized four days after the Bush-Putin summit. Washington makes it quite clear that personal friendship between the Russian and U.S. presidents does rule out a discussion of the issue that is very unpleasant for Russia, but which the U.S. considers to be the cornerstone of its policy.