Politicians from Russia, the USA, China, Germany, France and Great Britain gathered for an official meeting in Berlin yesterday. The summit was devoted to the nuclear program of Iran. Russian Foreign Minister Sergei Lavrov spoke on Russia’s behalf, whereas the point of view of the US administration was represented by US Secretary of State Condoleezza Rice. EU’s High Representative for Common Foreign and Security Policy Javier Solana also attended the meeting. 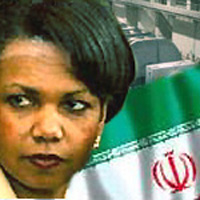 The diplomats agreed to stick to the peaceful solution of the Iranian nuclear problem. Sergei Lavrov pointed out that there has been “no military aspect found in Iran’s nuclear program yet.” “Before we set forth any threats we need to find a confirmation and facts, especially in such a sensitive region as the Middle East,” the Russian Minister for Foreign Affairs said.

All participants of the meeting agreed that they were ready to give Iran the last chance.

The UN Security Council discussed the Iranian problem in New York the day before. Notwithstanding Washington’s pressure, Iran has managed to win another respite. The White House wanted Tehran to shut down all uranium-enrichment works in two weeks. However, the statement from the Council said that Iran had been given not 14, but 30 days.

When 30 days elapse, the UN Security Council will address to its nuclear watchdog, the Director of the International Atomic Energy Agency Mohamed el-Baradei. The council will wonder if Iran was fulfilling the requirements of the IAEA resolutions, including those demanding the cessation of all uranium-enriching activities. After that the Security Council and the Atomic Energy Agency will scheme out their next steps.

The discussion of the issue in New York was rather intense. Moscow and Beijing insisted on the withdrawal of the USA’s requirement about the two-week term. The final variant of the official statement approved as a result of the summit in the USA does not contain the Western wording saying that Iran’s activities in the nuclear industry threaten international peace and security. It is worthy of note that such a statement could initiate international sanctions against Teheran.

Mohamed el-Baradei backed up Russia’s stance on the problem. The head of the Atomic Energy Agency is certain that the world is not facing an inevitable threat. That is why Baradei disapproves the idea of introducing international sanctions against Iran.

Analysts believe that nothing will change a month later. Needless to say that Tehran will not accept the UN’s and IAEA’s requirements in 30 days. Will Iran have to face the threat of military actions that could possibly be taken against it by the international community afterwards? The USA, for example, has destroyed its potential anti-Iranian allies: Saddam Hussein in Iraq and the Taliban regime in Afghanistan. If the USA ventures to go on another crusade against Iran, the initiative will have no support either in or outside the States.

The USA, however, prefers to stick to another point of view. According to Condoleezza Rice, Iran has been isolated more than ever before. Rice scathingly called Iran's nuclear strategy a "salami" tactic, referring to how Tehran continued to change its ambitions slice by slice. Ms. Rice apparently meant that Iran wins one concession after another saying that it is a “peaceful nuclear program.” It is not ruled out that Iran can eat the whole salami one day.