In nine emissions, diplomats expect to bring to the audience a new look on Russia as a modern and powerful country

For nine weeks starting on Wednesday, the Latin American Spanish speaking TV audience will have the opportunity to have a different approach on Russia as a modern and powerful country. Titled: “Russia, New Horizons”, the new production of the Russian Embassy to Buenos Aires  is aimed to commemorate the 60th anniversary of the Great Patriotic War and a good opportunity to offset daily information coming from global agencies. 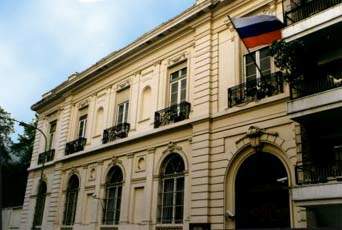 The weekly documentary has been produced with the help of local TV filmakers, using images from the national archives and it will be aired by an Argentine cable network, which is also seen in other Latin American countries, as Mexico, Chile, Uruguay, Paraguay and Peru)

The TV program is hosted by Russian Ambassador to Buenos Aires, Yuri Korgachin, who tells the audience about Histroy, politics, economics, culture and lifestyle of Russia and its citizens. The last two emissions will be dedicated to celebrate the 60th anniversary of the victory over the Nazists in the Great Patriotic War.

“This is the first time that Latin Americans will have the opportunity to get a first hand view on today's Russia”, said Mr. Korgachin in a news conference. “We want to bring our culture and our history to a region that it is very important for us”, said the ambassador, who previously represented Russia before the Colombian government.

In Argentina only, about four million homes are connected to either cable or satellite TV systems. This South American nation ranks within the top five countries of the world in this subject. This will secure an important audience for the series, which goes in prime time.

Photo: A view of the  facade of the Russian Embassy in Buenos Aires