The USA’s national debt is increasing by $2.43 billion everyday. People expect the state debt to top the ten trillion dollar mark in the next few years. 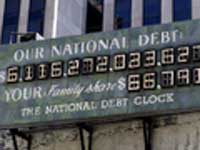 A special huge electronic display in New York which shows in real time the size of state debt will not be able to cope with such a high figure. In 1989 the national debt clock was placed in Times Square so that Americans could see how effectively their government was working. At the time the national debt stood at 2.7 trillion dollars.

Developer Douglas Durst owns the clock and his father erected it. He hoped to make Americans understand the economy better. The clock worked fine for ten years but in the run up to the new millennium it crashed. In its final moments the clock read that the national debt was $5.7 trillion and that the family share of the debt was $74 000. Durst believed that such a level of debt would not last long and he was right. Within two years the debt had started to grow at an unprecedented rate.

Durst pulled the plug on the clock in 2000, but it was switched back on in 2002 when debt started to once again increase. In 2004 a new model replaced the original clock which was able to express the figure in a shortened term in the event that in the future the debt suddenly started to rise at an unthinkable rate. Now the figure on the clock goes up by $20 000 every second.

So what is to be done? It is expensive being the “light of democracy” in Iraq and Afghanistan, keep revolutionaries at bay and to “teach” the rest of the world how to live their lives.

Anton Struchenevsky, an analyst from management company Troika Dialog says, “Even when the state debt reaches the 10 trillion dollar mark, an economic crisis will not occur in the USA and the dollar will not crash. It is in the interests of the USA’s main creditor, China, to have a stable American currency and protect the American market.”