President Hugo Chavez says Washington is plotting to kill him, while the US dismisses allegations as wild

The USA and Venezuela entered this week into a new chapter of their long running verbal dispute since President Hugo Chavez took power. On Sunday, the South American leftist leader accused the White House of being behind a plot to kill him, as asked his followers and collaborators to stop US badly needed oil shipments if that happen. 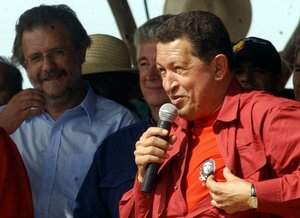 "I know I am condemned... I'm sure in Washington they are planning my death," Chavez said in a regular Sunday broadcast. "If anything happens to me, you can forget about Venezuela's oil Mr Bush."

The US State Department quickly replied on Chavez statements, dismissing as “wild” accusation of a CIA plot to kill him. "Unfortunately, in addition to these wild charges and ridiculous statements that we've seen, we haven't seen any concrete progress on reversing the negative trends as far as democracy," State Department spokesman Richard Boucher told reporters.

At the same time, Venezuela's Information Minister Andres Izarra accused US officials and some media of working to isolate left-winger Mr Chavez in the international community. He was responding to recent statements from Washington branding Mr Chavez a threat to regional stability and criticising his Government in the world's number five oil exporter.

"All these declarations together are part of clear policy," Mr Izarra told a news conference. "This is a campaign from the United States to isolate and discredit the Venezuelan Government."

Both governments have intensified their rhetoric in recent weeks, but neither has taken any action to disrupt ties between the United States and Venezuela, one of the world's largest oil exporters and a traditionally reliable U.S. supplier.

Washington has recently expressed its concerns about the sale of 100,000 AK-47 Russian assault rifles and 50 combat helicopters, as part of a Russo-Venezuelan military cooperation agreement. The US administration believes weapons could fall in the hands of neighbouring Colombian rebels, but failed to provide with evidence of that.