EU and USA demand that Belarus opposition leader be freed

The elections which took place in Belarus on 19 March are causing tension between western countries and Russia. On Friday the EU and USA both announced that they intended to impose sanctions on Belarus. However, the Russian Ministry for Foreign Affairs does not agree with the stance being adopted by western countries towards the events in Minsk. The Minister for Foreign Affairs Sergei Lavrov said that the OSCE, Europe ’s main election monitoring body, “had a preconceived idea of the results and has played an inflammatory role.” 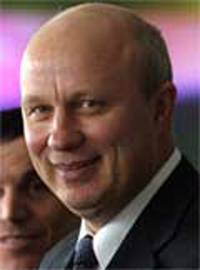 EU and USA demand that Belarus opposition leader be freed

According to official figures, Alexander Lukashenko received 83% of the votes cast. However, the opposition does not accept these results. The EU and the USA yesterday condemned Belarus for their treatment of the protestors’ actions and they also called for the immediate release of the former presidential candidate, Alexander Kozulin, who was detained last Saturday after the authorities broke up a demonstration. Little is known about what sanctions may be imposed on Belarus. It is more than likely that Belarusian officials will be prevented from going to the USA and countries of the European Union. Some Belarusian officials have not been allowed into western countries for over a year, but now the list of banned people will be extended. On Alexander Milinkevich’s official website it says that sanctions will not only be imposed on officials in government, but also on military forces and judicial bodies.

On Saturday 25 March the most dramatic events yet since the elections took place in Minsk. The Belarusian opposition planned a huge protest to take place on the day of the anniversary of the declaration of independence of the Belarusian republic. Leader of the opposition Alexander Milinkevich announced to journalists that “the street protest did not come to an end of its own accord.” However, since the opposition is not able to express their views in the state-controlled media, they are trying to make their point by having a campaign of mass protests. The events of 25 March had several aims, one of which was for the opposition to draw new strength and support. At the political rally Milinkevich announced the creation of a “Freedom” movement.

The centre of Minsk, however, was full of police from early morning, who were trying to prevent the meeting taking place on October Square. The police broke up and pushed back the crowd of protestors. Nevertheless 5-10 thousand people managed to gather at the nearby Yanki Kupaly Square. The opposition rally was completely peaceful and ended when former presidential candidate Alexander Kozulin unexpectedly called for those gathered to move the rally to a particular spot on Okrestin Street, where many people had earlier been detained. Alexander Milinkevich, who had always spoken of the peaceful nature of the protest, was againstthismovesince he believed that a move to Okretin Street may provoke violence. Nevertheless, some of the protestors followed Kozulin there, amongst them friend and relatives of those detained by police.

When the group passed through the most lively parts of the city, they were faced by a strong wall of military officers and special agents. The demonstration was broken up through force; the authorities fired smoke grenades and used batons against the protestors. Many of those involved in the demonstration were arrested including Alexander Kozulin. Journalists saw how some people were taken away from the scene on stretchers.

In the evening the Minister of the Interior Vladimir Naumov made a statement to the press in which he accused Alexander Kozulin of intending to seize power and the demonstrators of violence towards the police. The minister said that judicial proceedings would be taken against those arrested, but he declined to say how many people had been arrested. Naumov said that eight soldiers and policemen had been injured. It is claimed that only one of the protestors required medical assistance. Hospitals in Minsk have also refused to tell journalists the official figure of how many people suffered in the clashes with police.

Moscow has not given an official reaction to Saturday’s events, although one of the journalists of television station Pervoi Kanal was one of those arrested. Speaking on Friday, Head of the Russian Ministry for Foreign Affairs Sergei Lavrov said of the tent camp in the Belarusian capital, “I would not call what I saw on television today a crackdown or some forceful action. In any case it bears no comparison with what is happening in other countries.”

The Minsk police accused Pavel Sheremet, the arrested Pervoi Kanal journalist, of using bad language. Sheremet’s father said that police beat his son on the way to the police station. On Sunday, in spite of the pneumonia symptoms, Sheremet remained in police custody and all his mother’s attempts to give her son some treatments turned out to be in vain. It is thought that Sheremet, who had arrived in Minsk to visit his parents, is now in a detention centre on Okrestin Street .

All the hopes of the Belarusian opposition now lie in the hands of the European Union and the USA , especially given Russia’s position in the conflict. However, some political analysts in Minsk think that Russia ’s position is not quite so straight forward. Yaroslav Romanchuk, an independent expert from the analyst centre “Strategy” , says “If Alexander Lukashenko decides to end the previously agreed deals with Russia over gas and over the privatization of certain sectors of industry, then Moscow and Brussels will be able to find common ground in the Belarus issue.”