The recent presidential election in Belarus has not caused a stir in the West. Foreign politicians have released quite languid statements regarding Alexander Lukashenko’s victory. Official statements have been released from the US administration, NATO, the Council of Europe and the OSCE. The officials, however, withheld comments. Only US officials called upon the Belarus administration to revise the election results. It is noteworthy that eleven civilians were killed in Iraq on the day when the above-mentioned announcement was made from the White House. European leader released no comments on the matter: the elections in Afghanistan and Iraq can hardly be referred to as “more democratic” in comparison with Belarus. However, the elections in the two war-torn countries meet Washington 's interests and therefore avoid any criticism. 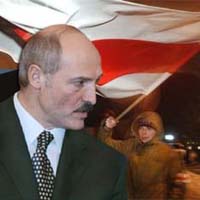 The US administration refused to acknowledge the results of the presidential election in Belarus. American officials supported the Belarussian opposition and said that the new election should be held. Scott McClellan said that the pre-election campaign in Belarus had been conducted in the atmosphere of fear. The official added that the US government could only admire the courage of Belarussian democrats. Mr. McClellan added that the US administration was considering actions that could be taken against the Belarussian government. The US official made bold to speak on behalf of the European Union as well. According to him, the USA and the EU were going to take measures against several Belarussian officials responsible for falsifications and violations of human rights.

An official spokeswoman for the European Commission Emma Udwin said that the EU was not going to introduce economic sanctions against Belarus. The EU intends to take prohibitive measures against several officials responsible for the violation of democratic rights during the presidential election in Belarus. The EU has thus taken quite a reasonable stance towards Belarus: many European countries receive Russian fuel via its territory.

NATO Secretary General Jaap De Hoop Scheffer also criticized the election in Belarus. Mr. Scheffer referred to the opinion of OSCE observers and described the vote as “non-democratic.” The NATO Secretary General urged the Belarus administration to respect the euro-Atlantic democratic norms, including the ones which Minsk is obliged to observe being a member of the Partnership for Peace program.

It is obvious that Europe will have to criticize Alexander Lukashenko because of the USA's influence in the OSCE. It is not ruled out that foreign ministers of this organization will approve a negative statement against Belarus. Such an attack will cause damage to Russia as well taking into consideration Russia's unfriendly relations with this organization. The OSCE, which sent 500 observers to Belarus, harshly criticized the elections on Monday. Alcee Hastings, president of the Parliamentary Assembly of the OSCE, conducted a press conference in Belarus’ capital Minsk and said that the presidential election in the country had failed to comply with international standards. In particular, the Belarussian authorities denied 19 OSCE officials visas. Hastings added that Lukashenko’s four rivals did not have equal possibilities and added that the persecution and arrests of certain political figures had created an atmosphere of fear in the Belarussian society. The official said nothing about any violations committed during the voting. The OSCE is expected to expose a detailed report on Belarus in six or eight weeks.

OSCE spokespeople pointed out, though, that all candidates running for presidency had been provided with two hours of free time that they could use on TV or radio channels. One can therefore conclude that the criticism of the West comes to general remarks about the “non-democratic election” in Belarus.