It is already clear now that the visit of the Russian Foreign Minister Sergei Lavrov to Georgia, which started on Thursday evening, will not bring any considerable changes in the character of relations between the two countries. They can still be described as stagnant: it is hard to expect anything else, if the Georgian government continuingly provokes scandals with Russia. 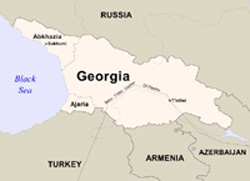 Georgian officials introduced sudden changes to the program of the Russian minister's stay in Georgia only one day before the start of the visit. The program was added with a ceremony at the Memorial complex in honor of the warriors, who fell in battles for the country's territorial integrity. The Russian minister refused to visit the complex. The head of the Russian Foreign Affairs Ministry stated that it was incorrect to amend the program only a day before the actual visit. Such official matters are normally coordinated several months in advance. In addition, the minister said that the Russian Federation should take account of its status as a country assisting in the regulation of conflicts in Abkhazia and South Ossetia. Such an undertaking as visiting the memorial complex would not be capable of creating the necessary atmosphere for resuming conflict-regulating talks. In other words, the minister implied that Russia was not intended to quarrel with Abkhazia and Ossetia with a view to do something pleasant for Georgia. As experience shows, it would take Russia too long to enjoy a friendly gesture in return.

The reaction of the Georgian government was rather predictable. The hysterics in the Georgian administration was arranged shortly before the Russian foreign minister's visit to Georgia. The speaker of the Georgian parliament, Nino Burjanadze, stated that there was no other example in the world diplomatic practice, when officials refused to lay flowers and wreathes to warriors' graves. “This is not neighbor-like. This is an inadequate gesture on the part of Russia. This is a question of elementary politeness,” Georgian Foreign Minister Salome Zurabishvili said. The national Georgian television said that Russia's decision not to honor the memorial complex was “a spit in the face of the Georgian nation.” As a result, the type of the visit was changed from the “official” to “work” visit.

South Ossetian politicians had a completely different attitude to Sergei Lavrov's refusal to visit the memorial complex in Georgia. “Sergei Lavrov, the Foreign Minister of Russia, of the country, which did everything possible to save South Ossetia from fascism, acted wisely when he turned down the blasphemous and provocative suggestion,” the chairman of the committee for defense and security of the unrecognized republic, Yuri Dzidzoity said.

It is worth mentioning that the Russian foreign minister visited the grave of Georgian Prime Minister Zurab Zhvania, who mysteriously died in Georgia in the beginning of February. Sergei Lavrov believes that the former prime minister of Georgia was a “man, who did a lot for the peaceful solution of conflicts in Georgia.”

It is possible to conclude that Georgia is not interested in normalizing relations with Russia. The Georgian government wouldn't have provoked a conflict about nothing otherwise. Lavrov's attendance of the above-mentioned memorial complex would mean that Russia agrees with the policy of the first Georgian president Zviad Gamsakhurdia, who incited conflicts with autonomies and eventually broke up the nation.  It is also worth mentioning that thousands of Abkhazians and Ossetians were killed in those wars too – Georgians were not the only victims. It is virtually impossible to separate the good and bad in a civil war.