Ollanta Humala faces accusations of tortures and other crimes against humanity comitted while fighting agains maoist guerrillas in the eighties. 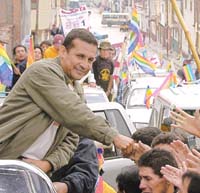 Ollanta Humala has jumped to the first position form almost zero thanks to his populist rhetoric and the support he received from other presidents of the region as Venezuela’s Hugo Chavez, Bolivia’s Evo Morales and Argentina’s Nestor Kirchner. Humala, who have recently faced serious accusations of being responsible for tortures and crimes against humanity while serving in the fight against maoist rebels about two decades ago, makes good use of his half-indigenous origin to get the support of the poor rural masses.

Despite the extraordinary performance, Humala will have to reach 50 percent of the votes on April 9 to avoid a second run, where he will face the opposition of either Flores or Garcia, who are favourites in the main cities. Flores is seen as the option for international investors, as Humala’s nationalistic rhetoric has targeted foreign investments as the responsible for the Peruvian poverty.

"Humala's support has risen thanks to those who just a short time ago said they would scratch their vote or did not know who to vote for," Apoyo's Director Alfredo Torres said in El Comercio newspaper, where the poll was published.The Apoyo poll also found 32 percent of potential voters had yet to decide whom they would vote for in the election, down from 41 percent on March 12.

Despite Humala’s lead looks consistent ahead of April elections, observers do not rule out a good performance of center-left Alan Garcia, who is targeting younger voters and lost in a close runoff to incumbent President Alejandro Toledo. Garcia, who presided over economic chaos and rising Shining Path rebel violence during his 1985-1990 presidency, has won back support as a charismatic moderate.

If a run-off election were held in May, both Humala and Flores were projected to win 50 percent of the vote, the first time a poll has indicated Flores would not easily beat her nationalist rival in a second round.Flores is most popular among Peru's small middle class and has the support of the country's business leaders.