Russia does not need USA's help in building democracy

Now everyone acknowledges that John Kennedy's election was not legitimate, a half of America still thinks that the election of 2000 was fabricated

About a hundred of Russian and American political and public figures wrote an open letter to the presidents of the two countries on the threshold of the Russia-USA Summit in Bratislava. The authors of the letter called upon Putin and Bush not to succumb to the pressure of those forces that are not interested in close ties between Russia and the USA, but to take new efforts to develop strategic partnership. The letter was particularly signed by Eduard Lozansky, the director of the American University in Russia, Sergei Markov, the chairman of the national civil council for international affairs, Gleb Pavlovsky, the president of the Efficient Politics Fund, and others. 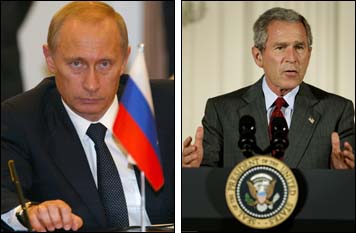 The letter touched upon three very important issues: Russia and USA's joint achievements in the field of the anti-terrorist struggle, the development of relations between the two countries, and certain suggestions to improve bilateral relations between Russia and the USA.

”A lot of our colleagues are very concerned with a current disturbing trend, which shows a gap between declarations and the worsening of Russian-American relations on the level of their practical realization,” Andrei Melvil from the Moscow International Affairs University believes. “One can witness a certain influence of a subtle political class in these relations. Both the Russian and the American societies take a smaller participation in political processes. We would like to get the civil society of the two states involved in Russian-American relations,” Andrei Melvil added.

”I would distinguish four levels: the relations between Russia and the USA are good on only one of them. The first one is the level of the presidents, who take the challenge closer, whom all countries see. The second one is bureaucracy, which cannot deal with the new agenda. The third level is the public opinion, which is too concentrated on internal problems. And finally, there are mass media that wage the “cold war.” When you read what Western press writes about us, you realize that a lot of things written there are not true. One may see Russian journalists gloating over Iraq too, for example.”

The US administration's negative estimation of democratic processes in Russia is one of the most important contradictions between Russia and the USA for the time being. “I think that the export of democracy is inefficient. Iraq is a very fresh example to everyone. Needless to say that it cannot impress anyone. Estimating democratic processes is an issue of trust on the top level. Russia is being told that it will not be able to build anything alone. However, we have to say that all that we have achieved in terms of democracy, we achieved ourselves. Western consultants' activity is perceived as restrictively successful in Russia. This is an especially neurotic subject now, which does not receive any analytical attention. Will the USA or the EU be able to formulate a real program to support democracy on the post-Soviet space? Everything that they offer in this respect does not withstand any criticism from the point of view of those, who is aware of the Russian political process. Furthermore, even those countries, which experienced democratic revolutions, did not conduct their reforms according to the recipes of the USA and the EU. That is why it is not clear, what they can really offer,” Gleb Pavlovsky said.

Official political statements are usually of the propaganda character – they simply represent the art of talking, which can be rather dangerous art sometimes. Belarus can serve a good example of it. The Belarussian opposition looks like a group of informal clubs attached to a respectable cultural institution. It is a very small group of people, which does not give any reason to view them as democratic opposition. On the other hand, there is a regime, which maintains the security of energetic transit, which is extremely important for the European Union. One may see that Alexander Lukashenko's regime enjoys considerable popularity in Belarus. There are no reasons to say that the current state of things needs to be destabilized in the country. Neither Russian nor American outstanding public figures elaborate a single democratic line in the two societies.

The director of the American University in Russia, Edward Lozansky, set out his certainty in the correct direction of democratic development in Russia. “It takes time to build democracy. Look at what the American democracy was like after 15 years of its existence. They had slavery, women were not allowed to vote – it continued for 150 years. Now everyone acknowledges that John Kennedy's election was not legitimate, a half of America still thinks that the election of 2000 was fabricated. Democracy is a very long process. I am sure that it will be built in Russia some day; it just takes time. Those, who criticize the Russian government now, have different reasons to do it. Condoleezza Rice has to do it because of her position, Senator McCain criticizes Russia for ideological reasons, Madeleine Albright takes part in the criticism too. In addition, both Albright and McCain are subjected to the lobbyist influence,” said he.

The letter also suggests the creation of joint US-Russian army bases in several regions with an active participation of the NATO-Russia Council for a more efficient anti-terrorist struggle. Edward Lozansky believes that it is hard to obtain UN Security Council's approval for preventive strikes: “One may forget about the UN and strike a blow on terrorists first. The UN is a too bureaucratic organization,” he concluded.