The death of Slobodan Milosevic has inflicted a severe blow to the International Criminal Tribunal for the Former Yugoslavia (ICTY), as chief prosecutor for the tribunal Carla del Ponte was forced to admit. 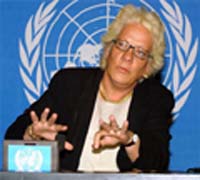 According to her, following the death of the former president of Yugoslavia , the tribunal “is in a coma”. In an interview with the French newspaper Le Monde Carla del Ponte admitted that the death of Milosevic was a serious blow to the moral state of the ICTY. She reported that the trial of the former president was meant to be concluded at the start of the summer. As Interfax reports, the chief prosecutor was intending to demand life-long imprisonment for Slobodan Milosevic.

However, Carla del Ponte has a recipe for the “resurrection” of the tribunal. For this two Bosnian-Serb leaders would need to be arrested – General Ratko Mladic and Radovan Karadzic, who have been wanted for about ten years.

Moreover, the State Duma of the Russian Federation is intending to make an announcement on Wednesday concerning the inexpediency of any further work of the tribunal. “The main aim is to raise the question of the futility of any further activity of the ICTY,” said the Chairman of the State Duma Boris Gryzlov. The speaker thinks that following the death of Slobodan Milosevic the work of the tribunal has lost all meaning.

The planned announcement notes that the tribunal “has entirely failed to realize the idea behind its creation. Throughout its entire existence the decisions taken by the tribunal have been noteworthy for their extreme level of politicization and bias. Double standards in its work have become the norm.”

“From the very start the idea behind the tribunal was flawed – history should not be judged,” considers political analyst and TV journalist Mikhail Leontiev. “For the thousandth time I can repeat that the founders of the tribunal had neither the moral nor legal right to judge the Serbs, because they are insiders, not independent observers.”

The role of the tribunal is assessed quite differently in the West. An editorial in The New York Times remarks that the court in The Hague, established 13 years ago, “was intended to show that no national leader, however highly positioned they may be, can commit terrible crimes without punishment.”

“Milosevic’s death is also bad news for the incipient concept of international jurisdiction, but we hope that it is not a total defeat,” write journalists for the American newspaper.

It should be added that today the International Tribunal closed the case of Slobodan Milosevic due to the death of the accused. The judges only needed two minutes to make this decision.