Milosevic was denied the right to live in The Hague

The International Tribunal for Former Yugoslavia has ordered to investigate the reasons of Slobodan Milosevic’s death. A spokesperson for the Foreign Affairs Ministry of France said that Milosevic had died a natural death. 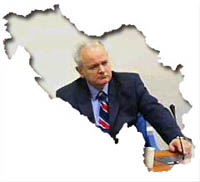 Milosevic was denied the right to live in The Hague

Shortly before his death, the prisoner of The Hague inquired about a possibility to undergo a medical treatment in Russia. The Tribunal turned the request down. It was particularly said that the medical conditions which Milosevic could receive in Moscow would not be better than the ones he was given in The Hague. However, Milosevic blamed the local doctors for the improper medical services. The current state of affairs has become a very serious problem for the Tribunal. An official spokesman for the tribunal said that the organization was not responsible for Slobodan Milosevic’s death.

One may say that European officials do not regret Milosevic’s death much. NATO Secretary General Jaap de Hoop Scheffer said he was sorry that Milosevic had died before the end of the trial. “It is unfortunate and in many aspects unsatisfactory, given the countless victims of the Balkan wars, that justice now will not be able to run its course,” Mr. Scheffer said. French Foreign Minister Philippe Douste Blazy said that he “would like to spare a thought for all those who suffered so much from ethnic cleansing, tens of thousands of men, women and children, which Milosevic conceived and planned.” Austria’s Foreign Minister Ursula Plassnik said his death "does not change or alter in any way the need to come to terms with the past, with the legacy of which [he] has been a part.”

The President of Serbia Boris Tadic presented his condolences to Slobodan Milosevic’s relatives and to the Socialist Party of Serbia in which Milosevic was an honoured member. Serbia-Montenegro Foreign Minister Vuk Draskovic said Monday that he was "deeply shamed" by reactions in Serbia from Milosevic supporters following his death. "They are promoting a serial murderer - a man who sowed death, misery and hate - as a national hero," he said.

The news about the death of Slobodan Milosevic has made quite a stir in Belgrade. People took to the streets in Belgrade accusing the international community of the ex-president’s death. Thousands of people are mourning Milosevic’s death.

Another Serbian official has recently committed suicide in The Hague – the Croatian Serb leader, Milan Babic. However, Babic’s death has not aroused pity in the country: the politician was one of the key witnesses of prosecution on the cases of other Serbian politician, including Milosevic. It is believed that Milan Babic has committed suicide because of remorse and a long prison term (13 years.)

Slobodan Milosevic’s death in The Hague has received rather negative reactions in Russia. The leader of the Communist Party of Russia Gennady Zyuganov said those who initiated the shameful trial against Slobodan Milosevic were indirectly guilty of the ex-president’s death. “When they did not let Milosevic undergo a medical treatment in Russia they virtually denied him a right to live,” the first vice speaker of the Russian parliament Lubov Sliska said.

Many Russian politicians believe that the details of Slobodan Milosevic’s death must be thoroughly investigated. “The competence of doctors should become a subject of investigation as well. They refused to acknowledge the serious state of health of the former Yugoslavian president,” the chairman of the Duma Committee for International Affairs Konstantin Kosachev said.

Russia’s position is close to the point of view of Milosevic's Serbian followers. It is worthy of note that Russian politicians criticized the activities of the International Criminal Tribunal for Former Yugoslavia before as well. Similar remarks sounded from Vladimir Zhirinovsky, Dmitry Rogozin, Yevgeni Primakov and others.

Milosevic’s death has seriously undermined the authority of The Hague Tribunal. The death of the former Yugoslavian President may seriously complicate Serbia’s cooperation with the Tribunal. Serbia's integration in Europe is impossible without this cooperation.