The Polish President Lech Kaczyński has recalled that, before being elected to the post of head of state, he was one of the staunchest eurosceptics. In an interview with the German newspaper Die Welt he declared that, “the maximum level of integration into the European Union which is currently possible has now been reached”. 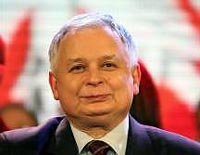 According to Kaczyński, the European Union is an artificial structure. Unlike at the national level, the Polish President thinks that the concept of a European people does not exist. The EU works as a “super-state”, taking over powers of the national governments, yet at the same time only has a “symbolic budget” at its disposal, which gives rise to its feebleness, marked Kaczyński.

It is no secret that the Polish leader has an extremely critical view of the European Union. Even before Poland joined the EU, when Lech Kaczyński was one of the leaders of the parliamentary opposition, he became famous as a consistent eurosceptic. As he then thought, joining the European Union would open the way for Germany to make territorial claims against Poland and he urged Europe, instead of building a “common European house”, to concentrate on developing relations with the USA as a “guarantor of peace and stability in Europe ”.

Nevertheless, after being elected to the post of head of state, Lech Kaczyński was by no means as categorical. It is one thing being in opposition, but another being head of state…In this respect it is noteworthy that during his visit to Kiev at the end of February this year, he assured Viktor Yushchenko that, from this moment on, Poland would actively lobby for Ukraine’s accession to the European Union. And that he personally would support Ukraine joining the EU and NATO.

It is interesting that, at practically the same time as the interview with Kaczyński was published, the foreign ministers of Hungary, Poland, Czech Republic and Slovakia called for the European Union to formulate “definite prospects for Ukraine”, meaning to designate at least a rough date for their accession into the EU and the criteria governing this.

However, Lech Kaczyński is not especially reliable in his role as a lobbyist for Ukrainian interests. In “old” Europe his previous comments have not been forgotten. Relations between Brussels and Warsaw are now relatively restrained. As an example it is sufficient to recall the idea of so-called “Energy NATO”, proposed by the Polish Prime Minister Kazimierz Marcinkiewicz. The essence of this proposal is that countries purchasing energy resources should create a system for guaranteeing joint security, which would provide for mutual support in crisis situations. For this it would be necessary to sign a corresponding agreement and draw up a whole system of measures, excluding the possibility of interruptions to energy deliveries. An important part of this system would be the creation of alternative routes for energy deliveries, which could become active in the case of an unexpected crisis.

However the “old” EU members gave this proposal a very cool reception, as it threatens the “dilution” of their influence. The thing is that Poland is counting on the USA joining “Energy NATO”, as the ways in which Washington could possibly grant help are much more extensive than European countries could. It is understandable that “old” Europe is hardly likely to agree to playing a minor role in the “energy alliance”.

It is highly likely that the current misunderstanding with Brussels has led the Polish President to be reminded of his role as a eurosceptic. Admittedly, this does undermine the promises which he made in Kiev. But this is a question of secondary importance.