American authorities announced that on Wednesday North Korea conducted a missile test. White House Press Secretary Scott McClellan said, “Based on all the facts, North Korea carried out two missile tests within close distance of one another. They have in the past carried out such tests.” 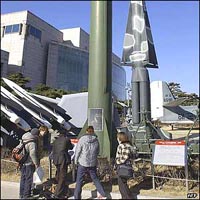 The military intelligence services of South Korea confirmed on Thursday that two missile tests were carried out near the Chinese border but that they land in North Korean territory. The tests took place in a test range in Sabushdin near Kim Cha Ek in the northern province of Hamken.

Representatives of the South Korean intelligence services say that in the last two days they have observed that preparations have been made for missile testing and in particular the transportation of essential equipment.

North Korea has for a long time abided by a moratorium on missile tests, but from time to time they occasionally launch tactical missiles. Last May they were launched in the Sea of Japan.

The USA considers the missile tests not only a threat to the region, but to the whole world. The official spokesman for the American administration John McCormack said, “We know that North Korea has carried out similar tests in the past. We continue to assert that North Korea’s missile program is a threat not just to the surrounding region but to the international community as a whole.” McCormack has asked officials in Peking to “abide by the moratorium on missile testing.”

The White House State Department has been keeping a close eye on the events in North Korea and the fact that missiles were fired near the Chinese border.

The missile tests carried out on Wednesday in North Korea do not threaten safety in Japan and have not damaged the voluntary moratorium taken against missile testing. The General Secretary of the Japanese government said, “Earth-sea and air-air missile testing took place and the launches do not have any direct influence on the safety of Japan.”

The Japanese Minster for Foreign Affairs said in a separate meeting with the press that, according to American sources, missile tests were carried out by North Korea near Japan. He reminded people that the agreed moratorium between Japan and North Korea extended only to ballistic missile testing.