The Ukrainian parliament, Supreme Rada, has approved Julia Timoshenko's candidacy for the position of the Ukrainian prime minister. Three hundred and seventy-three deputies voted for Timoshenko yesterday whereas the minimum amount of votes was 226. Viktor Yushchenko presented the structure of the new government to the parliament too. 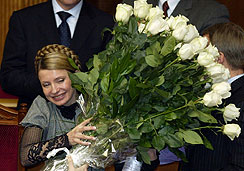 Communists were the only deputies, who voted against Julia Timoshenko for political reasons. Even Yushchenko's major rivals, the Party of Regions (chaired by Viktor Yanukovich) and the Socio-Democratic Party of Ukraine did not venture to make an opposition to the new government, for they basically shared the declared ideas.

President of Ukraine Viktor Yushchenko has already signed the decree to appoint Julia Timoshenko for the position of the Ukrainian prime minister. The document was signed shortly after the deputies made the final decision. In addition, the parliament withdrew deputy powers from Timoshenko too.

Ukraine's “orange lady,” a staunch ally of President Yushchenko, promised to eliminate the so-called vertical of corruption, when money accumulates at the bottom and goes up to the top level, while one tries to cover up another. Timoshenko stressed out that her government would take measures to raise wages to state officials to deprive them of the need to accept bribes.

Ukrainian President Yushchenko nominated Julia Timoshenko for the position of the premier on January 28th. Timoshenko has been a deputy since May of 2002; she is a member of the parliamentary committee for legal policy issues.

Julia Timoshenko was born in Dnepropetrovsk on November 27th, 1960. Timoshenko graduated from the economic department of the Dnepropetrovsk State University in 1984. Timoshenko launched her career after graduation, when she became the commercial director of the Terminal youth center. In 1991-1993, she became the director of a small enterprise Kub, which became a Ukrainian-Cyprian joint venture in 1994. In 1995, Timoshenko became the president of the industrial and financial corporation Joint Energetic Systems of Ukraine. In 1999-2001, Julia Timoshenko worked as a vice premier in Viktor Yushchenko's government; she was in charge of the Fuel and Energy Complex. Timoshenko speaks Russian, Ukrainian and English.

Julia Timoshenko will become the 14th head of the Ukrainian government and the first woman on the position.

In 2000-2001, Julia Timoshenko, her husband and several employees of the Joint Energetic Systems of Ukraine were implicated in a criminal case connected with a series of economic crimes. In 2004, Timoshenko was suspected of bribing judges. Spokespeople for the Ukrainian opposition say that their leader is not a criminal – she was persecuted by the Kuchma regime as a political rival. It is noteworthy that the Office of the Prosecutor General of Ukraine has recently exculpated the new prime minister. Russian law-enforcement authorities have certain claims against Julia Timoshenko too, but unlike Ukraine, Russia is not going to turn them down.