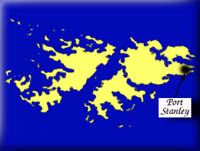 Shortly after an Argentine coast guard unit captured a British vessel fishing in Argentine waters near the Falkland Islands, the conservative opposition to Tony Blair in London warned on “bellicose behaviour” of Buenos Aires and questioned defence cuts. Shadow defence secretary Liam Fox said Argentina was “ behaving in an increasingly bellicose way over the Falkland”, as quoted newspaper reports that the South American country had doubled its air force.

Fox was worried the UK Government was sending mixed signals while there were "increasingly bellicose noises" coming out of Buenos Aires. “We must make sure that we make it clear to Argentina that we would do absolutely anything to defend the Falklands and any action from them would be extremely foolish", he concluded.

Earlier press reports, which were rejected by the Argentina’s ambassador to London last week, said Argentine planes were violating the Falklands’ air space, in an attempt to test the reaction of the UK air force stationed there. Those reports, which were published by three different UK newspapers a week ago, also warned on the alliance forged between Argentina and Venezuela’s president Hugo Chavez, who has called for the UK to hand over the Islands.

As Buenos Aires denies the claims, the UK Ministry of Defence says Argentina is a valuable ally. British officials say Argentina had 300 planes at the time of the 1982 Falklands war and now has just 100.

Quoted by the BBC, Mr Summers said: "I don't think we are overly concerned at the moment about what's happening in Argentina. The possibilities of them mounting an invasion are so remote as to be almost laughable."

Argentina and the UK have a long dispute over the possession of the Islands located in the South Atlantic Ocean. In 1833, a UK fleet invaded the Islas Malvinas (as they are known in Argentina) and took possession of the archipelago after defeating the small Argentine base stationed there. In 1982, the Argentine military dictatorship invaded the Islands, which led to a short war that left almost 1,000 killed from both sides.