Power struggle within the Muslim world may result in global war

On Monday Saudi security forces killed five al-Qaeda terrorists suspected of the foiled attack on the Abiquiq oil processing plant in eastern Saudi Arabia, according to a statement by the Saudi Interior Ministry. The attack could have become the largest al-Qaeda operation since December 2004 when the terror group tried to storm the Interior Ministry building. 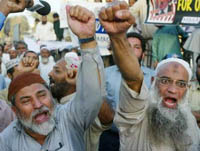 Power struggle within the Muslim world may result in global war

The present-day situation in Saudi Arabia where security forces exchange fire with al-Qaeda terrorists trying to attack Saudi oil facilities strongly indicates an ongoing power struggle in the Muslim world. The struggle is spreading far and wide these days. On the whole, the attacks in Saudi Arabia do not differ from the attacks against tourists in Egypt or attacks against local Jewish communities in Turkey and Morocco. They do not differ from the catastrophic attacks.

(in terms of consequences) launched by radical Islamists in Algeria. All the above actions aim to cause maximum damage to the authorities.

In case of Saudi Arabia, the maximum damage equals damage to the oil infrastructure. The moth-eaten revolutionary maxim – the worse, the better – is quite applicable to the current situation in Arabia.

al-Qaeda is the biggest threat to the Saudi royal family. The throne will be smashed to smithereens should the jihad fanatics prevail. Despite the fact that Saudi Arabia has long supported radical Islamists since the war against the USSR in Afghanistan, the country in its present form might as well cease to exist.

It is not a coincidence that the founder and longstanding chief of the Saudi security forces Prince Turki al-Feysal is regarded as a man who set up al-Qaeda. The prince had been in charge of the Saudi security force until the September 11th attacks against New York and Washington. There is a clear link between the 9/11 attacks and the prince’s resignation. Few analysts doubt that the Saudi security forces are linked to al-Qaeda. Needless to say, we can not say that a representative of the royal family or a member of the group of the most powerful princes is involved in al-Qaeda network. However, it is an open secret that many of the above supported al-Qaeda financially or morally in times when the terror organization did not seek to replace the Saudi monarchy with an Islamic government.

The situation in Saudi Arabia mostly mirrors the chasm in the entire Muslim world. Contrary to the appeals of the idealists, the ummah (Islamic community) has never been unified since the very start. Today we witness the ummah being subjected to Islamist globalization featuring destruction or supplantation of rivals of the Neosalafitic movement with al-Qaeda as part of it. The Islamists arenot wagingtheir major war against Europeans, Americans or even Israelis. First and foremost, they aim to assume control and exert influence over the Islamic world itself.

Even countries that never participated in religious wars e.g. Islamic countries of South East Asia are now joining a confrontation between moderate Muslims and extremists.

Thus, the aforementioned struggle for power and influence is beginning to spread on a worldwide scale. Hamas, a radical Islamic movement, won the parliamentary election in Palestine, the most secular region of the Arab world. Egyptian President Hosni Mubarak has been fighting against the Muslim Brotherhood, Egypt’s oldest and officially banned Islamist group, since the day he took office 25 years ago. Yet the Muslim Brotherhood won about 20% of the parliamentary seats it contested in November. Iranian President Mahmoud Ahmadinejad virtually carried out the “revolution from above.” It is not a liberal democratic revolution, it is a conservative and orthodox move aiming to boost nationalism and return to the traditional revolutionary values propagated by Ayatollah Khomeini.

Mahmoud Ahmadinejad, the president of the Shia Iran, is becoming a leader of the Islamic world – that is a particular feature of the current stage of the globalization. He competed against Saudi Arabia, and he won. He gained the victory in a competition that has been repeatedly lost by Ayatollah Khomeini and his followers since the Islamic revolution times. Today it does not matter whether he is a Sunni or a Shia. Today it really matters whether he is a radical or “moderate” conformist, and whether he is ready and willing to do his best in order to destroy Israel and curtail America’s influence in the Middle East.

The situation in the Middle East will continue to heat up until the Muslim world kicks off modernization from within, be it Westernization, secularization or traditionalism of a new kind, which will be capable of overpowering the aggressive political Islamization, a development aimed at sparking a conflict. The scenario also provides for a continuing increase in energy prices and a buildup of confrontation between the region and the non-Islamic world.

Saudi Arabia may fall apart should the extremists come to power. In this case the coastal area where Mecca and Medina are located, and the Eastern province with its oil reserves as well as Assir (formerly a part of Yemen ) will become either the provinces of different countries or territories without the rule of authorities e.g. present-day Iraq and Afghanistan. The above scenario can not be ruled out. It is being considered by the EU, America and Israel.