The up-to-date life in Belarus looks like a parody for the “best time” that people used to lead during the era of the USSR. The majority of Soviet citizens were fighting for healthy lifestyles, exemplary relations with work colleagues and moral image of the youth. 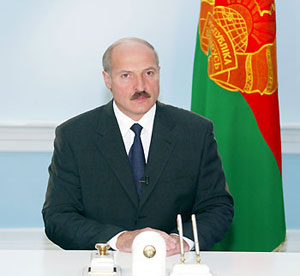 According to a recent order signed by Belarussian President Alexander Lukashenko, every market booth, not to mention large stores or servicing enterprises, is obliged to have a so-called “Book of suggestions and complaints.” Managers and directors of Belarussian enterprises have to organize mandatory “healthy lifestyle journals.” FM-radio stations have a new rule too: Belarussian artists must take not less than 75 percent of music programs.

Khimvolokno enterprise launched the “healthy lifestyle competition” on January 1st. The company's administration hopes that the more time employees spend on physical exercises, the less time they will spend on sick-lists. Most active sportsmen will receive special prizes at the end of the year – a TV set and a fridge. Sports accomplishments will be registered in special healthy lifestyle journals that every shop of the enterprise has at the moment. Every employee of the company will have a record in the journal: participation in sports undertakings, other local sports events, as well as the time that a person spends being ill at home.

Belarussian FM stations have to stick to a new rule, according to official regulations from the Ministry of Information. Belarussian singers and musicians should appear on the air on a much more frequent basis as opposed to foreign artists – 3:1. It is worth mentioning that the Belarussian show business is not that rich to meet the new requirement. Local DJs have to find a way out of the situation: they play Russian artists who were born in Belarus or at least lived in the republic. Furthermore, radio stations play local singers at night time, when the number of listeners if the smallest.

Belarussian students have recently started collecting signatures protesting against the new law, according to which they might be sent to work to any region of their country after graduation. Such “coercive works” will last for five years. The mandatory assignment of young specialists was put in effect in Belarus several years ago. Such practice gives local authorities a possibility to send a young specialist to a region where he or she would never venture to go – a remote village, for example. Needless to say that the wages for young specialists would be extremely low in such cases. The Belarussian government bears some resemblance to Soviet authorities at this point: “the state spends a lot of money on students and their education, so they will have to pay something back.” If the law is approved, Belarussian students will have to work in the countryside for five years as a “token of their gratitude” to the state.

Furthermore, Alexander Lukashenko signed a special order, according to which all enterprises are supposed to have so-called “Books of suggestions and complaints.” Belarussian officials try to explain to the population that Lukashenko's new rules do not repeat the Soviet model of the “complaint book.” Clients and customers will be able to write their constructive suggestions in those books. The books will be obligatory even for private enterprises, which was not practiced during the Soviet era. Belarussian people start wondering if such books of suggestions appear in the presidential administration. To crown it all, Alexander Lukashenko has recently changed national traffic rules: the president cancelled the paragraph that required headlights-on driving in the daytime. Lukashenko ordered the Internal Affairs Ministry to develop a new regulation and present it to his office.

Belarussian citizens have an impression that Alexander Lukashenko (or Batka - translates as 'father') is a very reliable leader – he knows where he leads his country to. When the Belarussian authorities were working on new traffic rules, a special hotline was organized to accept people's suggestions on the matter. Someone said cars should be confiscated from those who drive in the state of alcoholic intoxication.