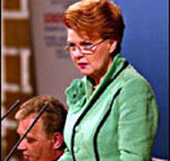 Celebration of the 60th anniversary of the WWII has turned into a real chaos for high-ranking authorities of the Baltic States.

Actually, it is doubtful they are eager to celebrate since May 9th , according to the Baltic citizens, is considered the beginning of the “Soviet occupation”. On the other hand however, the rest of the world celebrates 8-9th of May as the days of victory over the Nazism. Therefore, it would be rather inappropriate to disregard the anniversary altogether. This year, Moscow prepares to host leaders from dozen states including those from highly respected in the Baltic States USA and the EU.

The one word that very well defines today's order of things is confusion. However, Latvian president Vaira Vike-Freiberg has finally decided to travel to Moscow for the festivities. Due to the fact that European leaders will also be present, Latvian president considered it “to be of utmost importance for her to be close to them during such arrangements”. Lithuanian president Valdas Adamkus along with his Estonian colleague Arnold Ryuitel are still considering the invitation, although they will most likely be present as well due to the same reasons as Mrs. Vike-Freiberg.

In the meantime, Latvian president is worried about the fact that the three Baltic States find it difficult to find common language. According to the president, she has tried organizing meetings involving common interests regarding the May 9th issue, but unfortunately her initiative hasn’t received any support from presidents of the neighboring States. “We have discussed the issue in November upon our arrival to Vilnus along with Estonian president Arnold Ryuitel. However, we failed to discuss the matter in details; Valdas Adamkus had cancelled the appointment due to some urgent business in Kiev, in times of the “orange revolution”.” Phone discussions did not yield any positive results either. “It has become clear after a while that the initial proposal to arrange a meeting with a unified declaration lacked president’s support,” stated Freiberg in an interview to the Lithuanian radio station Žiniu Radijas.

According to the Latvian president, in the course of several years she has been trying to initiate such unified declarations of all the Baltic States, especially in regards to the NATO integration. “Unfortunately, neither of such propositions have been approved,” noted the head of Latvia adding that the situation in each of the Baltic States remains unique. “This proves, for instance, the fact that Lithuania has signed the border treaty with Russia whereas Latvia and Estonia have not,” stated the president.

While the Latvian president is worrying about the lack of mutual trust between the colleagues, delegates of the Russian State Duma intend to address Vladimir Putin with a plea to annul Mrs. Freiberg's invitation to the upcoming festivities in Moscow.

According to REGNUM, such actions are triggered by anti-Russian statements of the Latvian president. Initiators of such plea assume that it could be discussed in the State Duma as early as February 4th.