Guantanamo prison will never be closed despite international pressure on USA

In the middle of February five independent experts, who had been specially called upon by the UN Human Rights Commission, released a report calling for the international community to do everything possible to force the closure of the infamous Guantanamo base. The publication of this report is just one more example of international criticism of the USA for their unlawful detention of people suspected of being part of international terrorist networks. Despite constantly increasing pressure on the USA, any chance of success, although possible, remains minimal. 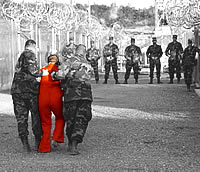 Guantanamo prison will never be closed despite international pressure on USA

There are two lines of arguments in favour of closing Guantanamo. Firstly the USA is criticized for the fact that the prisoners on the base are being kept in indecent conditions and that they are systematically degraded and subjected to torture. These accusations are especially prevalent in the report released by the UN Human Rights Commission.

In actual fact it is practically impossible to prove any of this. Several people who with the help of their national governments have managed to be released, or the small number of lawyers who have been able to meet with their clients have grounds to accuse the base’s administration of committing all the deadly sins. No qualified inspection of Guantanamo has ever taken place. American officials make the pretense of inviting human rights activists to the base, but their visit consists merely of a strange excursion round the base which does not give them the opportunity to talk to the prisoners face to face. In practice this makes the inspection pointless. On the other hand, it is difficult for even the most ideological members of the State Department to say anything to contradict the other, more significant aspect of the criticisms. This concerns the fact that the overwhelming majority of the so-called terrorists are being held on the base not only without having been sentenced by a court, but indeed without having even been prosecuted.

In this regard the study undertaken recently by specialists from the law faculty of Seton Hall University in New Jersey makes extremely interesting reading. According to the information presented in this work, it is often every difficult to even find out who a particular inmate of Guantanamo used to be. The overwhelming majority of the prisoners have never taken part in battles with American troops, hence it is all the more impossible to prove their involvement in planning any acts of terrorism.

Only five percent of the prisoners were taken captive by American troops. The others were arrested with the help of the Pakistani security services or Northern Alliance forces. Some were sold to the Americans by headhunters, many of whom could end up in Guantanamo on much more concrete grounds.

Although several genuine monsters are indeed being held now in Cuba, the USA is having significant problems in terms of proving the guilt of the majority of the prisoners. For example, they have managed to prove several prisoners’ involvement with various Islamic organizations, however many of these do not appear on the official American list of terrorist groups. All this is actually becoming absurd: the only thing of which American investigators can accuse many prisoners is that they did not put up enough resistance to the Taliban or had a Kalashnikov machine gun on them at the time of their arrest. Taking these accusations into account, they perhaps should have long ago sent even President Karzai to Cuba.

There is no doubt that the international public needs to criticize the White House more actively and effectively, especially since the UN along with its General Secretary Kofi Annan, the European Parliament and a whole list of other powerful international bodies have now joined in with this criticism. And troubles also lie in store for the USA in another respect: courts throughout the world, including in Western Europe , are beginning to examine more and more seriously the lawsuits of former Guantanamo prisoners. Let us hope that the day is not far off when one of these claims will be sustained by a court. We should recognize that, although the criticism of the existing prison on Cuba has so far not had a great deal of effect, it should not diminish. As we all know, constant dripping will wear away a stone.