Uproar in the Muslim world but why not in Turkey?

The protests by Muslims, angered by the cartoons of the Prophet Mohammed published by the Western press, continue. 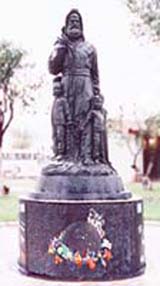 Uproar in the Muslim world but why not in Turkey?

In Denmark they are mocking holy Christian images. Slippers with the image of the Holy Mother on the soles are now being sold. In one of the local comics a stylist turns to someone carrying a cross for Goliath and asks what would better suit him, a crown of thorns or a Tyrolean hat.

From the beginning of the scandal many observers have remarked that the Islamic world is also far from being sensitive towards the feelings of believers of other religions. For example, it is still remembered today that a Buddha statue in Bamian (Afghanistan) was destroyed by people who class themselves as Muslims.

In Turkey not one month goes by without some event that is offensive towards many Christians. The Turkish authorities demand that Italy return the remains of the Holy Saint Nicholas which were taken by crusaders in 1087 to the Italian city of Bari . It is not known why the remains should be returned to the Turks and what they intend to do with them. This is especially the case considering the fact that in 2005 in Demre a monument to Nicholas, which a Russian sculptor gave to Turkey as a gift, was removed. What’s more is that the monument was made with money collected from all over Russia .

After pressure from Russia, the European Union and the USA, the monument was taken out of storage and placed next to a dilapidated church where Saint Nicholas once served. However, on the plinth, where the sculpture of Nicholas stood, they have placed a plastic Santa Claus.

Pravda.ru held an interview with sculpture writer Georgii Pototsky on the current situation.

“The monument stands near the doors of the church in Demre and millions of pilgrims come to see it. However, they have not returned it to its previous location. The monument became a victim of the pre-election struggle between the new mayor and the old one. Islamic fundamentalists were outraged that a plastic Father Christmas had been placed there instead of the bronze sculpture. This rage over the Christian monument was actually stronger than that caused by the cartoons published in a Danish newspaper which have resulted in such uproar in the Islamic world.”

Why did the Turks take the monument down? Who decided that it should be removed?

“The new mayor of Demre decided that it should be removed. It’s not clear who supported the move.”

What was the reaction in Russia and the rest of the world?”

“Once the Russian, European and American press had published the news, the Turkey’s Minister for Culture promised to solve the problem. He did not keep his word. His reasoning was that they could not tell town mayors what to do.”

What’s your opinion on the Prophet Mohammed cartoon scandal?

“I think that it is terrible when anyone satirizes Christ, Mohammed or the Buddha. It is, nevertheless, impossible to stop people from saying what they want. It is indeed more dangerous when people fear saying or writing what they want. Everyone should apply a degree of self-censorship. At the end of the day a cartoon is a scratch of the pen. However, to destroy a whole monument, the work of dozens of people, is simply disgraceful. All the same it has not occurred to anyone to storm the Turkish Embassy. It is possible to engage in civilized discussions to resolve the situation.

Why has such a fuss been made over the cartoons when the removal of the Christian monument has hardly been reported at all?

“If the Turkish government does not want to react that is their right. Yet for any nation to cause destruction and set fire to embassy buildings is simply fanaticism and it incites war. For us, Christians, peace and love, Christ and Nicholas are concepts that cannot be separated. We lead our lives according to the commandment, “ Thou shalt love thy neighbor as thyself.” I do not think that Muslims, who are today storming embassies, are acting according to the commandments of Mohammed. I consider their actions and the Prophet’s commandments to be completely at odds with one another.