China and Taiwan fight over 30 USD

China and Taiwan are once again in dispute. They each hold different views on unification. Peking of course claims that the island to be a province of China. In Taipei some of those in power believe that Taiwan should be independent although at the moment they prefer to only mutter these sentiments so as not annoy Peking . 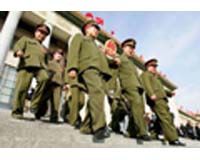 China and Taiwan fight over 30 USD

This time the intention of the Taiwanese authorities to end the notion of national unification has become a cause for conflict. On 29th January Taiwan’s President Chen Shui-bian announced the possibility of declaring itself independent. Peking reacted decisively by harshly expressing the wish that the union be preserved. Curiously Washington also reacted angrily to the announcement saying that the separation was somewhat premature.

In spite of the harsh reaction from China and the USA, the Taiwanese authorities have already taken the decision to begin the process of separation.

China’s anger is understandable. The National Reunification Council was created in the 1990s and aimed to create an alliance between Taiwan and the Republic of China. It became as it were one indication that sooner or later the island and China would become one state. In the Council’s yearly budget there is only 30 US dollars. Despite this the Chinese are responding very harshly to any attempt by the Taiwanese authorities to become independent.

In an official statement from the Office for Taiwanese Affairs which is part of the State Council of the Republic of China Chen Shui-bian was called “the creator of troubles and destroyer of relations between the banks of the Taiwan Strait.” Furthermore, the Taiwan President was called the saboteur and destructive force that is damaging stability of the Asia-Pacific region.

The fact that Washington has come out and in effect supported Peking for the first time can be seen as strange. The USA used to be Taiwan ’s protector. For about the last twenty years diplomatic conflicts have flared up between the United State and the Republic of China because of the island. This was especially the case when China drew up plans of possible invasions of Taiwan .

The situation, however, is now somewhat different. Washington is no longer arguing with Peking. This is perhaps due to Iran’s nuclear program. When the dossier on Iran’s nuclear activities arrives at the UN, the American administration will hope to secure the backing of all members. This may explain the USA’s current position towards Taiwan and China .

Taiwan has thus not chosen a very good time to separate from the Union that has only 30 US dollars.