Abu Hamza al-Masri, a radical Muslim cleric and one of the most distinctive supporters of jihad in Europe, has been sentenced to 7 years in jail by London court. The 47-year-old handless cleric was found guilty on 11 out of 15 charges. Specifically, he was found guilty for inciting racial hatred, for preaching violence and calling for killing non-believers. Abu Hamza was arrested in London on an extradition warrant issued by the U.S. government. However, he is to serve a sentence in the U.K. first, according to the British law. 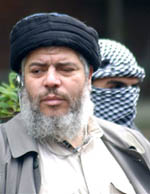 Today’s Britain is no longer a country where religious extremists can take shelter. Following the July 7 bombings in London last year, the British authorities have apparently changed their stance on all sorts of radicals based in the U.K. In actuality, the cleric was arrested at the end of 2004, several months prior to the London suicide attacks. During the search in his apartment, the police found radical religious literature, army protective clothing and a self-defense electric shock device. According to police, terrorists including al-Qaeda members linked to 9/11 attacks, repeatedly took shelter in a mosque where Abu Hamza had been preaching.

Abu Hamza was born Mustafa Kamel Mustafa in Alexandria, Egypt, to middle-class parents. He came to London in 1979 with plans to make a career in civil engineering. He became quite popular with radical Islamists by mid-1990s. Preaching in Finsbury Park mosque in northern London, Abu Hamza openly called for jihad, for killing “non-Muslims.” The cleric took part in the war in Afghanistan and sustained the injuries to his eye and hand.

The prosecutors handed to the jury more than 700 tapes with recordings of Abu Hamza’s speeches, along with a 10-volume Encyclopedia of Afghan Jihad penned by the cleric. All the documents contained direct calls for the killing of non-Muslims. The members of the jury returned unanimous guilty verdicts. Sentencing him, Justice Hughes said: “You used you authority to legitimize anger and to encourage your audiences to believe that it gave rise to a duty of murder.”

Abu Hamza pleaded not guilty to all the charges. He is likely to be extradited to the United States after serving a 7-year sentence in the United Kingdom. The U.S. intends to try the cleric for his attempts to set up a terrorist training camp in the state of Oregon.

A number of well-known terrorists were among the “grateful audiences” preached by Abu Hamza. In particular, the mosque in Finsbury Park was attended by Richard Read, who tried to blow up a transatlantic passenger airliner, and several suspects involved in terrorist attacks on September 11, 2001 in the United States. The French citizen of Moroccan dissent Zachariah Mussaui, currently on trial in the U.S. for planning one of the 9/11attacks, also visited Abu Hamza’s mosque. The first court session in Washington was adjourned shortly after the 37-year-old defendant disobeyed the judge who told him to keep his peace. The defendant refused to recognize his lawyers by saying that he “does not know who these people are.” “They are not my lawyers – I am al-Qaeda and they are the Americans,” Mussaui was quoted as shouting before the guards led him out of the courtroom. Now the jury is going to decide whether to execute the terrorist or sentence him to life imprisonment.