U.S. Defense Secretary Donald Rumsfeld has been extremely talkative during the last two weeks. The Pentagon top man is renowned for his uncompromising tough talking. Yet he kept a pretty low profile in terms of public statements in 2005. Perhaps he did not feel like talking at a time of continual trouble in Iraq and a series of scandals involving high-tanking officials of the Bush Administration. 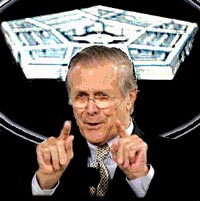 Rumsfeld broke his “vow of silence” at the beginning of this month. He sounded like a man who finally let go and spoke out as much as he could.

Venezuelan President Hugo Chavez was the first target Rumsfeld had in his sights. Rumsfeld likened Chavez to Hitler and accused him of power usurpation. All and all, the Pentagon head showed a great deal of concern about the so-called “populist regimes” in Latin America. Only his boss, President Bush, could be more profuse when it comes to showing concern.

Iran was the next top concern on Rumsfeld’s list of U.S. Having delivered the message about the “Big Brother” watching Venezuela’s every step, Rumselfd shifted his focus to Iran. Rumsfeld is confident that Iran is “the main sponsor of the international terrorism.” He did not rule out the possibility of a military action against Iran if that country pursues the nuclear program.

Aside from being good at making threats, U.S. defense secretary can also play the role of an energy expert. At least he looked like one at the 42nd Conference on Security Issues, which took place in Munich last weekend.

The whole story began shortly after Georgian President Mikhail Saakashvili brought another accusation against Russia, which was allegedly using “energy weapons” for achieving its foreign policy goals. Pravda.ru recently reported on a “smart” move by the Tbilisi authorities aimed at ending Georgia’s dependence on supplies of Russian natural gas.

It is unclear whether Donald Rumsfeld is aware of the “economic geniuses” currently at the wheel in Georgia. He probably does not know that Georgia is buying gas from Iran at a price that is twice as high as the price for Russian gas. However, Saakashvili’s report on the “energy weapons” apparently cut Rumsfeld to the quick. He called on the conference participants to help countries like Georgia resolve the energy problems.

At the same time, Donald Rumsfeld should be paid a compliment for refraining from elaborating on ways of assistance. Anyway, Washington is providing financial aid to “countries like Georgia.” Georgia is using the funds to pay for the overpriced supplies of Iranian gas. So the problem of the Russian “energy weapons” is being tackled in the most idiotic way.

Looks like U.S. defense secretary did not fully understand what he had told the conference. Georgia is buying Iranian gas at a speculative price. The money is provided by the U.S. as financial aid. On the other hand, Iran supports international terrorists, according to U.S. Administration and Donald Rumsfeld in particular. So where does the money of U.S. taxpayers go to after all? Who is eventually going to receive aid from Donald Rumsfeld?

U.S. Defense Secretary is not stranger to being in the spotlight due to rather confusing comments he made on a variety of subjects. In 2003, he was awarded the “Foot in Mouth” award by Britain’s Plain English Campaign. Rumsfeld received the award for the most baffling comment by a public figure. By all appearances, he would not mind to win yet another award this year.

“The U.S. has showered Georgia with hundreds of millions of dollars. The Americans are ready to do anything to strengthen its influence in that country. Ending Georgia’s dependence on Russian fuel supplies is part of the plan even if its fulfillment involves cooperation with Iran. In the meantime, Iran is going to be dependent on the U.S. ally since there is no other country Iran can sell its gas at such a high price. In other worlds, the U.S. is trying to kill two birds with one stone by making both Georgia and Iran dependent on the U.S.”

Sergei Markov, a political scientist, a member of the Public Chamber:

“Saakashvili’s efforts in making the image are very successful. Despite being an authoritarian politician, he is very good at portraying himself as a democratic leader. And some people buy into his story, they are mostly related to U.S. military-industrial complex. Those people are stuck in the Cold War era. Russia is their principal enemy. Rumsfeld is one of those people.”