Pentagon to take the US society under total control

America has changed a lot during the time of George W. Bush's presidency. Many things are still the same in the every-day life of the Unites States, of course. On the other hand, average Americans could see dramatic changes in culture, economy and politics. As a rule, the changes took place because of the ongoing war against the international terrorism. Therefore, there is nothing surprising about the fact that the Pentagon has undergone the majority of the changes against such a background. 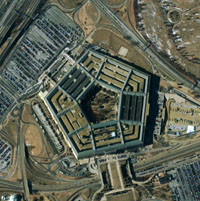 Pentagon to take the US society under total control

The unexampled modernization of the US Army, which started during Bill Clinton's era, continues to determine the activities and priorities of the US military officials. Apparently, the Pentagon has a goal to create the army of the future as seen in Hollywood blockbusters.

It goes without saying that maintaining the military modernization is especially profitable to the powerful defense complex of the USA . The project to set up the so-called evolutionary brigade is said to become highly lucrative for the US defense industry. The project is set to be launched in March of 2007 in Texas .

There is hardly any information available presently about the military unit of the future. It is only known that the unit will include about 800 best soldiers. The servicemen will be using up-to-date development of the US defense science. The program will supposedly last before 2016. Needless to say that it is going to bring immense profits to the US defense industry.

Another novelty which the Pentagon had to experience during George W. Bush's presidency is connected with the increasing role of military officials in the USA's foreign politics. The Pentagon has virtually become as important as the US Department of State. The Pentagon has been recently given a legal permission to fund the armies of USA's allies. Such an opportunity seemed absolutely impossible not so long ago: the Department of State was solely in charge of such financial assistance. US diplomats originally expressed their indignation about the new law. According to the law, any regime could gain access to financial sources for its army once it claims its status of a US ally. No one can give a precise answer to the question of whether the US administration sticks to certain criteria when rendering such foreign assistance. Some specialists say that a non-democratic state could also receive funds from the Pentagon to destroy its own population under the guise of the anti-terrorist struggle.

The military politics run by the US administration is rather tough. Even US Secretary of State Condoleezza rice prefers not to raise any objections to the Pentagon. To crown it all, Donald Rumsfeld is more of a diplomat than Ms. Rice.

The life of common US servicemen has undergone considerable changes as well recently. The Pentagon comprehends the experience which the US army gained in Afghanistan and Iraq . The Pentagon changes its strategies and tactics for the first time since the war in Vietnam . US servicemen in Iraq look especially carefree and off-handed even in comparison with their British allies. As a result, the number of US casualties in Iraq and Afghanistan continues to grow speedily. Nowadays the Pentagon uses several survival training programs for US military men to teach them how to survive in the enemy country before they are deployed there.

Hollywood companies built a prototype of an oriental country near Fort Irwin , California . The project, the cost of which made up some $50 million, resulted in the construction of a town with houses, local civilians, gunmen, Western journalists and employees of humanitarian and charitable organizations. The US administration uses this state-of-the-art military theater for training the goal of which is to reduce the number of losses in Afghanistan and Iraq .

One can assume that every year of the anti-terrorist campaign, the duration of which could be likened to the one of the Cold War, as Mr. Rumsfeld put it, will finally make a military society in the USA . It is interesting, though, how the US administration is going to glorify democratic values at this point. It is an open secret that there is no democracy at war.