Venezuela expels US diplomat for espionage

Washington confirmed it had received a communique from Venezuela's foreign ministry on Tuesday asking that its naval attache John Correa be declared a persona non grata. 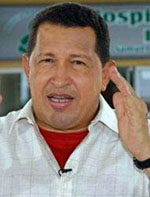 Venezuela expels US diplomat for espionage

Venezuela is to expel the Washington’s naval attache to Caracas accused of passing secret information from Venezuelan military officers to the Pentagon, as president Hugo Chavez warned he would throw out all US military attaches if further espionage occurs. US sources later confirmed that the US Embassy in Caracas had received on Tuesday a communique asking that its naval attache John Correa be declared a persona non grata, but refused to comment on the case.

"We have decided ... to throw out of the country a military official from the military mission of the United States for espionage," Chavez said in a nationally televised speech celebrating the seventh anniversary of his government. "We have declared the United States Navy commander named John Correa persona non grata. He should leave the country immediately," Chavez said.

Reports about a large scale case of espionage flooded Caracas this week since Vice President Jose Vicente Rangel said an undisclosed number of active and retired Venezuelan military officers were caught passing information to the Pentagon. On Thursday, Chavez made public the announcement, which further heightened tension between both nations.

"We warn the imperial government of the United States that if their military attaches in Venezuela continue to do what this captain has been doing, they will be detained ... and the next step would be to withdraw the whole so-called military mission of the United States," Chavez said. "Venezuela is respectful, and will always be respectful of international conventions" on diplomatic missions, Chavez said. But in cases where an embassy official is caught in flagrant wrongdoing, "we detain him and we turn him over to the embassy so that he leaves the country immediately," he added.

Shortly after making public the scandal, Chavez flew to Cuba , where he will be received by his close ally Fidel Castro to be awarded with the UNESCO 2005 International Jose Marti Prize on Friday in Havana .